Batman Peeples, mackerel tabby and king of the Peeples family menagerie for 18 1/2 years, crossed the rainbow bridge across the universe on Wednesday, December 8, 2021, in the loving arms of his devoted pet grandparents, Nadine and Stephen.

A historically healthy, talkative, and affectionate cat, a creature of habit with uncanny, instinctive timing, Batman had been diagnosed with inoperable cancer in early October by his longtime veterinarian, Dr. Evelyn Vega of Happy Pets Veterinary Center.

His weight and health declined slowly, and by Sunday, December 5, it was clearly time. Dr. Vega agreed on Wednesday and assisted in Batman’s transition at 2:50 in the afternoon in a quiet, private room at Happy Pets in Valencia, a 10-minute drive from the Peeples residence in Canyon Country in the Santa Clarita Valley.

“Our family has lost the best kitty companion we’ve ever had, and we’re devastated,” said Stephen, noting he and Nadine both grew up with cats, each one special in his or her own way.

“Batman was a true character — very smart, highly entertaining, a wonderful companion for our kids, Scot and Veronica, and always ready to play, even when he was older,” Stephen said.

“As the years passed and the kids moved out to carry on their own lives, Nadine and I insisted Batman stay with us,” he said. “He’d follow Nadine around the house. She called him our ‘cat-dog.’ He was very vocal; we could actually exchange meows and carry on a conversation. We’re not convinced he ever knew he was a cat. We spoiled him rotten and would do it all over again in a heartbeat.”

Batman was born July 4, 2003, one of a litter born to a friend of Nadine’s eldest sister, Cheri Martini White, one of Scot and Veronica’s three aunts. The two teens picked this kitten and named him Batman because his ears stuck straight up, like the comic book and movie superhero’s iconic cowl.

When Batman was about seven weeks old, the Peeples family picked him up and took him home, and immediately began the bonding process by petting him, feeding him, and making him pose for the first of 5,827 photo sessions.

The kitten’s markings were perfect but he had one small birth anomaly — a shortened tail with a kink in the bone at the tip. Stephen’s suggestion for a name, Kinky, was summarily kiboshed by Scot and Veronica.

“Batman was such a smart cat,” Veronica said. “I remember when I’d feed him dinner, I’d show him two packets of food and ask him to choose, right hand or left hand. He’d reach out his paw and bat at the one he wanted, and it wasn’t the same hand every time.”

“Batman was fastidious and never missed the litter pan, literally from the day we brought him home to the last day of this life,” Stephen said.

“And he was exceptionally punctual. We could almost set our clocks by the schedule he kept. I work in a home office and in the morning he would come in and greet me with a ‘MaWOW!” then visit again when it was time for me to take a lunch break. I’d let him jump on my lap for a rubdown and take a mental health break for a few minutes.

“He’d wander off after 15 or 20 minutes, then show up ma-WOW-ing again at about 6:30 p.m. when it was his dinnertime. The time we humans sat down to dinner would vary, anytime between 6 and 9, but if Batman didn’t eat at 6:30, he’d remind us what time it was with a yeowl.

“And invariably he would walk into the office at 10:36 p.m. when it was time for bed, to be preceded by a mandatory full rubdown with face massage and belly rub on the living room floor that went on from 30 seconds to several minutes,” he said. “After he’d had enough, he’d get a final snack and then join Nadine and me on our bed, sleeping between us.

“He would curl up between us on his little blue kitty bed, and bang his tail on our bed, because he was happy. But it was a bit irritating for us. So I would grip his tail, lightly, until he stopped. Then we would fall asleep with me still holding his tail. Over time, he stopped banging his tail, but still expected Dad’s tail-grip as he fell asleep. That went on for years.

“Batman was so smart. The entrance to our master bedroom has double doors, and we close them at night. But he’d wake up at 3 a.m. and scratch at the door to get out. He’d put his paw under the door and try to pull it open. I finally figured it out: I removed the latch from the door lock. From then on, he could reach a paw underneath the door and pull it open, without waking us up. The door was properly hung, so it slowly closed on its own.

“During the winter, Batman would spend many daytime hours snoozing in his favorite kitty bed while basking in front of the little space heater under my desk. 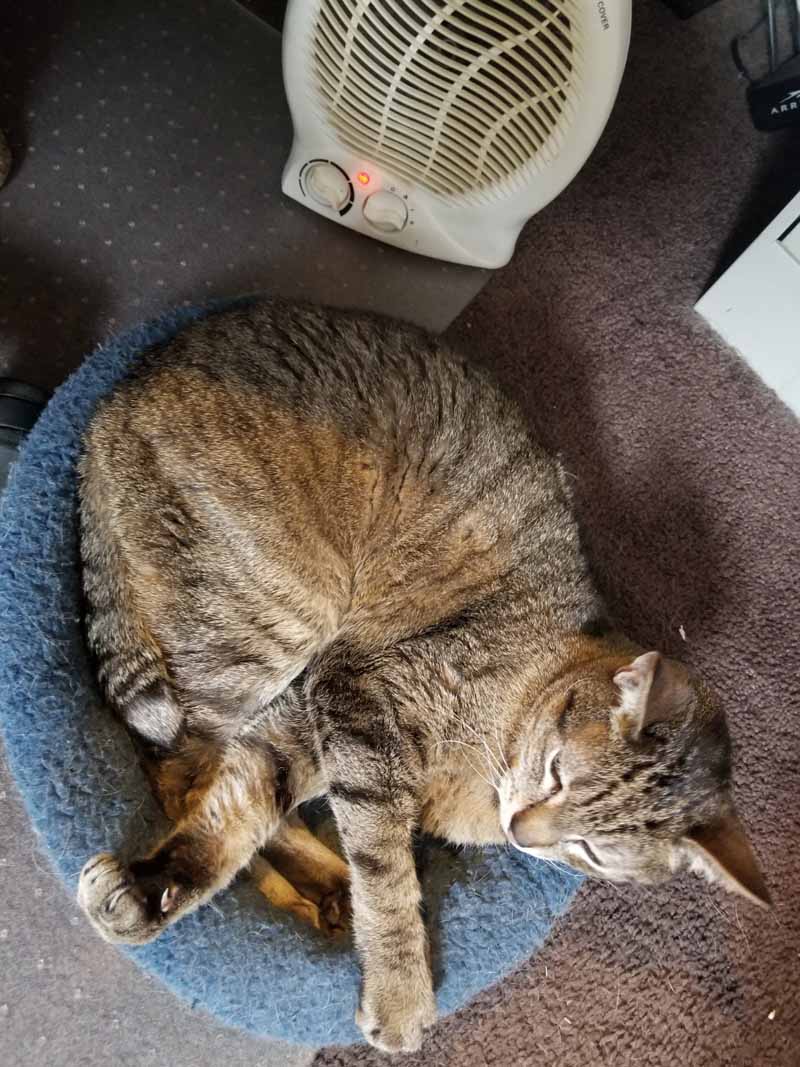 “We had a few minutes of panic around Christmas 2015,” Stephen said. “We couldn’t find Batman anywhere. We checked all his usual spots. No kitty. Then we called him for dinner. Suddenly, he popped out from under the tree. He’d been snoozing with the presents.”

Stephen happened to have a kitty Santa hat handy, and Batman, ever the media-savvy cool cat, just chilled in place for a pic.

“Batman made our family complete,” Stephen said. “Even after we rescued and adopted Lennon in October 2016 and Freeda in January 2018 and they joined the Peeples menagerie, Batman ruled. He let them know from the start who was top dog in the house; he would just ignore their doggie nonsense.

“Lennon and Batman always got along fine; it took a little time for Freeda, the Type A dominant Doggie Diva to learn. Batman was so fearless, if he felt like it, he would drink from the dogs’ water bowls in their presence, and they’d just stand and watch.

“They both know he’s gone. Especially Freeda, who sensed he was sick at the end. They’ve been extra lovable since we came home without Batman.

“The Batman stories are just endless. Others may find them boring, but we don’t,” Stephen said.

“He was always an indoor cat but loved to go out the kitty door onto our condo’s balcony in the morning to catch some rays. But once he somehow got outside the front door of our condo and we shut him out on the landing without seeing him. Sometime later, Nadine heard scratching on the door outside, and when she opened it, he ran in, yeowling, as in, ‘How dare you lock me outside?’

“Speaking of yeowling, if we were away from home for a couple of days, we’d leave enough food and water out to last him, and in some cases, Scot or a neighbor would stop in and feed him and give him some attention. So he never went hungry. But when we’d walk in after our trip, he would greet us at the door with a round of yeowls, bitching at us because we’d left him alone. We’d pick him up, give him extra rubdowns to try to make up for it, and he’d quickly forgive us, then be extra close and loveable with us for the next few days.

“Batman in his last few years or so developed a long, drawn-out power-yeowl that would wake us up in the middle of the night, or early in the morning. We could hear him half a block away. We took him to the vet thinking he might be complaining about something physical. Nah, just another ruse to get attention and rubdowns.

“It got so sleep-disruptive that in desperation we tried putting his food and water in the front bathroom, where his litter box also is, and his kitty bed on the toilet seat, and locking him in there. He power-yeowled “WTF?!” a few times, but we were able to get some sleep. He soon got used to it, to the point that at the end of his evening rubdown, he’d go into the bathroom for a snack, then jump up on his bed and curl up for a final face rub to tuck him in.

“This bedtime ritual went on for years. After the dogs came into the picture, he’d come in at 10:36, and then wait in the bathroom for a few minutes while I’d take them outside for the last pee call before bed. That way, Batman and I could do our routine without them disrupting us.

“These were the last two times we did this, on October 28 and October 30,” Stephen said. “We are so incredibly glad we got these, because on Halloween, he didn’t want to do it anymore, and that was it.”

“Batman’s presence was so large, and he was so much a part of our lives, there’s a huge empty space for us right now,” Stephen said. “We know he is irreplaceable. We are so thankful to have our human kids and canine grandkids to help comfort us, and they do, even as they also grieve and seek comfort.”

Tributes to Batman, the Coolest Cat

Batman’s family, friends, and fans paid their respects upon learning of his passing, and it comforted the Peeples humans knowing he was loved far beyond our humble home.

All the vets and techs at Happy Pets Veterinary Center loved him. He didn’t need to see them often, but was a perfect patient when he did, especially in his last three months as he was in hospice at home.

“We always carried him in, never needed a cat carrier, at any age,” Stephen said. “When one of us was holding him wrapped up in a comfy towel from the house to the car, he trusted us completely and never tried to escape. He sat on my lap, or Nadine’s, and just looked out the car window, saw the sights, and enjoyed the ride.”

“I am so sorry for your loss,” Dr. Vega said in a note to Stephen and Nadine. “Batman was a good boy and he lived a good long life with you. As much as it hurts to let him go, it is the best for him. He will forever be your angel and watch over you, Freeda, and Lennon from above.”

“You guys gave Batman the best life,” said Jeff Thaw, one of Stephen’s boyhood friends, and parent to multiple cats, in another note. Jeff and his wife Faith have experienced the anguish of many pets’ passing. “I know his passage over the Rainbow Bridge will be easy. I will ask my guys already there to show him the ropes, keep him company, and be his new forever friends.”