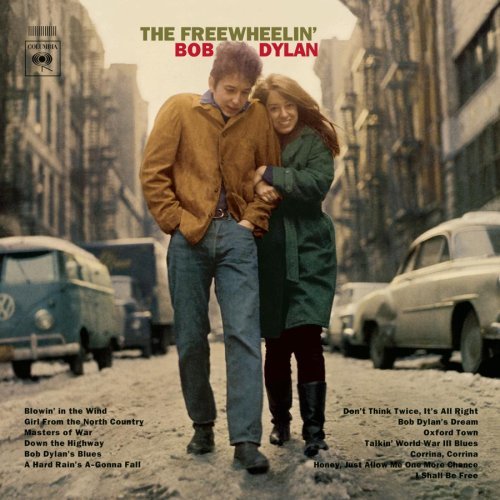 For years Suze Rotolo was the mystery girl Bob Dylan was pictured walking with down a slushy Greenwich Village street on the cover of his second album, 1963’s “The Freewheelin’ Bob Dylan.”

Rotolo was his first serious relationship in New York City after he arrived there from Hibbing, Minn., in late January 1961. They met in July at a folk concert at Riverside Church. She was 17 and he was 20. She was an artist, theater actress, set designer, into poetry, politics, overall creative-type, raised as a “red-diaper” kid by left-leaning working-class Italian parents.

In 2008, after remaining mum and eschewing the spotlight for 45 years, Rotolo finally published her memoir, “A Freewheelin’ Time: A Memoir Greenwich Village in the Sixties” (Broadway Books/Doubleday/Random House, New York).

If you’re into Dylan and Bob lore, this is fascinating insider stuff. Rotolo’s take on the nascent Village folk scene after Dylan arrived is full of colorful references to the other folkies they worked and played and partied with. Through her, he was introduced to the New York art, social and political scenes.

Ga-ga as he was about her, and she about him, at first, theirs was a stormy relationship. Both were highly creative, overly sensitive, complex kids with raw nerves, wariness, distrust, paranoia, etc. During their time together, Dylan went from wet-behind-the-ears kid busking in tiny dives like Cafe Wha?, The Gaslight and Gerde’s to international superstar, and being collared by media with the “voice of his generation” millstone. It was ultimately overwhelming for her.

Rotolo’s parents were pre-Stalin Commies who endured some heavy persecution during the post-war McCarthy era. Her folks and Suze later saw the abject disparity between the purist Commie system and the totalitarian way the system was executed in Cuba and behind the Iron Curtain. Eventually, she blew off politics altogether.

Her parents and sister Carla hated Dylan, and he felt about the same about them. They thought he wasn’t good enough for Suze, that he was just using her. Bob thought Suze’s mom and sister were controlling and meddlers. Rotolo and Dylan were not made for each other, and external forces of people and circumstances around them exacerbated the friction. They had an undeniable attraction but were looking to get things from each other that they ultimately couldn’t provide for each other.

Part of the issue was the traditional male-dominant, female-submissive dynamic in relationships that preceded the sexual revolution and rise of feminism and fight for equality for women. Rotolo was a little ahead of her time on this. The old folk tradition was a boys’ club, revolving around the guys as the artists, and their girlfriends as “chicks” (if unmarried) or “old ladies” (if married). Rotolo refused to buy into being either chick or old lady. “I will not be a string on the guitar of someone else,” she writes.

Rotolo also refers to songs Dylan wrote and how he wrote them (many different ways) during the few years they were together and doesn’t cite songs as being specifically about her. She does refer to herself as his muse and believes that many of the songs he wrote then were informed by their relationship or their experiences. Among them: “Don’t Think Twice, It’s All Right,” “Boots of Spanish Leather” and “Tomorrow Is a Long Time,” which he wrote in 1962 when she was on a trip to Europe, and he felt abandoned and angry.

Rotolo was at Dylan’s side, however, in September 1961 when he got a rave New York Times concert review, and when he played harmonica on a session in NYC backing blues diva Victoria Spivey.

Session producer John Hammond was a legend who had signed Billie Holiday and Count Basie to Columbia years before. Hammond was highly regarded, even revered, industry-wide. During a break Hammond asked to hear some of Bob’s stuff and Bob played him a few tunes.

The upshot: A 10-year (I believe 10-album) contract with Columbia, which sounded unreal at the time. A few of the long-established folkies whose deals weren’t so sweet, or who remained unsigned, scratched their heads. They’d been struggling for years and resented this whippersnapper interloper cashing in so fast.

Rotolo recounts how some of Dylan’s early Village mentors, like Dave Van Ronk, felt Dylan shouldn’t have recorded “House of the Rising Sun,” a traditional lament that Dave had established as his own through years of performing it. Van Ronk, about to record his own version, decided not to, and never performed the song again. Dylan’s version was passable, but nowhere near the tour de force Van Ronk’s had been. (When Brits Eric Burdon and The Animals covered it and hit #1 in the U.S. in 1964, neither did anybody else.)

She writes about the role Albert Grossman played as Bob’s manager (Grossman is a movie unto himself) and Bobby Neuwirth, who was Dylan’s court jester in the early, ego-tripped-out flush of first fame. Neuwirth later toured in Dylan’s Rolling Thunder Revue.

A few years into his Columbia deal, Dylan was huge, but still getting the original royalty rate he got before hitting the big time. When the deal was up in late 1971, he signed with Asylum and recorded the “Planet Waves” album. Ultimately he wound up re-signing with Columbia in 1973 or 1974 and dropped “Blood on the Tracks,” a #l album in early 1975.

From there he’s written his own ticket. He’s still on Columbia and the label lets let him do whatever he wants. The cache of having him on the label is worth way more than $$$ from the latest rap album no one will remember next week.

Rotolo writes about Dylan and “The Ed Sullivan Show.” He’d been booked to play the top-rated Sunday night variety show just after “Freewheelin'” was released. He showed up in May 1963 to rehearsals deciding to sing “Talkin’ John Birch Society Blues,” a send-up of the right-wing fanatic group of McCarthyite remnants that was a vocal political action group at the time. The rehearsal went fine, but then suits from either the show or the network told him to do a different song, that “Birch” was too controversial. Rotolo describes how steamed Bob was backstage, pacing around, trying to decide what to do. Ultimately, he refused to change the song, split the studio, and was summarily banned from the Sullivan show forever.

Just after that, Columbia approached Bob about dropping the track from “Freewheelin.'” Surprisingly, he agreed, also taking the opportunity to update the album by dropping three older tracks in the Woody Guthrie vein and replacing them with more recent, original “finger-pointing songs,” because “that’s where my head’s at right now.” The original pressing is now a rare collector’s item. About the same time, 1963, Peter, Paul and Mary’s version of Bob’s “Blowin’ in the Wind” was a #1 pop hit and all that also helped bust him out of the Village fast.

Speaking of Sullivan, in early February 1964, on The Beatles’ first visit to U.S. for “The Ed Sullivan Show” and a couple of concerts in NYC and DC, the band was holed up in Delmonico Hotel, surrounded by mobs of screaming teenage Beatlemaniacs. Dylan was with them. They were mutual fans and their managers put together a summit. This is all in Dylan’s 2004 memoir, “Chronicles Vol. 1.”

Bob got to the room and sparked a reefer. The Fabs had never smoked it before, they told him. They preferred “prellys,” or prescription uppers, and booze (well, rum and Cokes, real sophisticated tastes).

He was surprised because in “I Want to Hold Your Hand,” he thought they were singing “I get high…” instead of “I can’t hide.” So they all had a laugh about that, and from that time, “having a laugh” meant smoking some weed.

Apparently put up to it by Dylan, Rotolo writes, Harrison called her on the phone, saying he was stuck with his bandmates and Bobby Dylan in this hotel, and inviting her to bring some girlfriends and come over to visit. Suze was a huge Beatles fan and got a couple friends together and headed to the hotel, which they found was “impenetrable.” Finally she and one of her friends managed to get a phone call through to the Beatles’ hotel room, and Dylan got on the line. Suze and Bob got into a verbal beef because she’d brought extra people, and he was edged. She said to herself, “Beatles be damned,” hung up on Dylan and went home.

Suze was in the studio with Dylan for the “Highway 61 Revisited” sessions in ’65, sitting on Al Kooper’s B-3 bench, following his direction to play just two notes at certain times. She had no idea, she just did it. She couldn’t recall the track title, but it wasn’t “Like a Rolling Stone,” she wrote, because Kooper was the organist on that track.

Rotolo was with Dylan at the Newport Folk Festival when he “went electric” that year, one of rock’s all-time most controversial events, and she recounts how backstage after the set Dylan was noticeably excited about pulling it off.

She witnessed first-hand the chemistry and marketing strategy that brought Joan Baez and Dylan together and felt jealous. Baez was already well-established and recognized his songs represented the future of folk, breaking out of the topical “talkin’ the latest headlines” groove. She glommed onto Dylan’s songs as her next phase. Baez’s imprimatur and live performances with him helped Dylan establish credibility among folk artists and audiences. (Later, “Any Day Now,” Baez’s 1968 double-album of Dylan songs, combined her drop-dead-gorgeous spine-tingling contralto with some of his greatest early songs, including a version of “Sad Eyed Lady of the Lowlands” that clocks in at 11:05 and still feels too short.)

Rotolo was also among the groups of students who traveled to Cuba during the post-Cuban Missile Crisis ban on U.S. travelers going to Cuba, which got her into hot water with the FBI. She met Fidel, Raul and Che. Dylan was not with her then; this was ’65 and they were over as a couple by then.

Rotolo recounts that toward the end of their relationship after they had stopped living together on West 4th Street, she discovered she was pregnant. Bob was the would-be dad and the two agonized over what to do. Neither was ready or yet in a position to provide a decent environment for an infant, yet abortion in the mid-1960s was still illegal and potentially dangerous. In the end, the two found a qualified doctor who performed a safe abortion.

I had never heard or read of this before her account.

What’s REALLY interesting is comparing Rotolo’s side to Dylan’s take on their relationship, as he describes it in “Chronicles Vol. 1.” It’s been a few years since I read/listened to “Chronicles,” but I recall it’s much different. He focuses on the valuable cultural stuff he learned from her, about art,  politics, music and the whole NYC scene. She does that, but fills in a lot more blanks, adding a whole other emotional subtext to the story.

In addition to his “Peeples Place at KHTS” blog, Stephen K. Peeples is a features writer/reporter and photographer for KHTS Radio News (hometownstation.com) and SCVNews.com, and host, writer and co-producer of the weekly “House Blend” music and interview television show on SCVTV, community television for the Santa Clarita Valley (scvhouseblend.com). A former SCV music and entertainment columnist for The Signal (2004-2011) and drummer with SCV jazz group RainTree (raintreejazz.com, 2010-2011), Peeples is a Grammy-nominated record producer (“Monterey International Pop Festival,” MIPF/Rhino, 1992), an award-winning radio producer (“The Lost Lennon Tapes,” Westwood One, 1988-1990) and an award-winning online editor (The Signal website, 2007-2011).  For more information, email skp@stephenkpeeples.com or visit stephenkpeeples.com.

John Lennon: 40 for 40 Years, and Still a Voice for Peace