Rock ‘n’ roll Originator Little Richard sat down for an interview with Westwood One producer Stephen K. Peeples and air personality Steve Downes at the Continental Hyatt House on Sunset in West Hollywood on Jan. 10, 1986.

The King AND Queen of Rock ‘n’ Roll, the Quasar of Rock, lived upstairs in Room 319 at the infamous hotel, nicknamed the “Riot House” because it was the scene of much rock ‘n’ debauchery in the ’70s and ’80s, especially.

Little Richard, then 53, was making a major comeback at the time, 30 years after he’d first awop-bop-a-loo-mop alop-bam-boomed the American music scene with “Tutti Frutti.”

In the last few months of 1985, he’d guest-starred as the Rev. Marvelle Quinn on “Miami Vice” on the little screen and co-starred on the big screen as irate neighbor Orvis Goodnight in Paul Mazursky’s Nick Nolte-Richard Dreyfus-Bette Midler comedy feature “Down and Out in Beverly Hills” (for Touchstone-Silver Screen Partners dist. by Buena Vista and still in advance screenings on interview day). 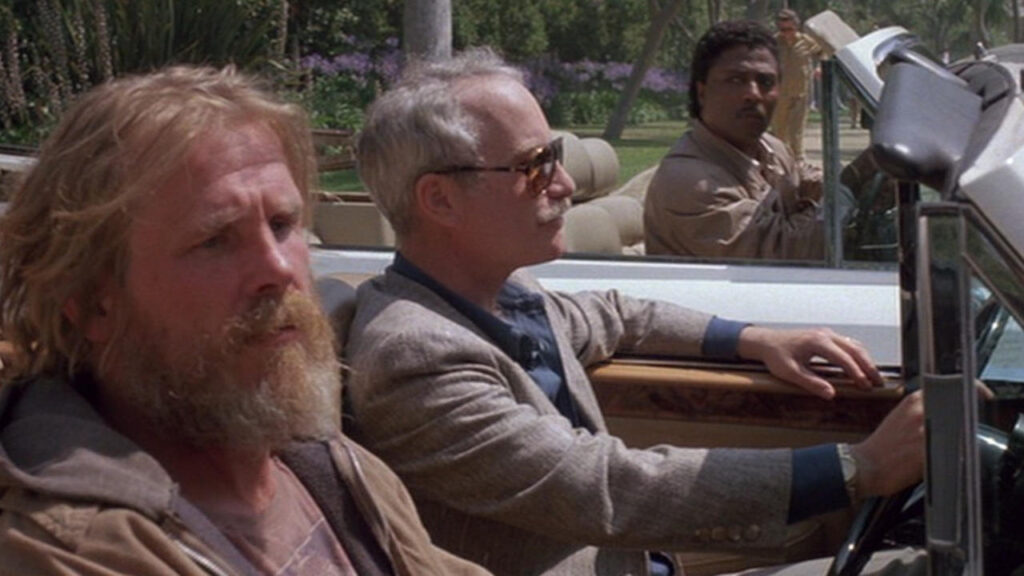 In October, a solo car crash into a pole on Santa Monica Boulevard almost took him out (and precluded him from attending his induction into the Rock ‘n’ Roll Hall of Fame as an inaugural inductee in January).

Charles White’s (aka Dr. Rock’s) biography, “The Life and Times of Little Richard,” was out in paperback. (I’d talked with both of them before, on Oct. 9, 1984, when the hard-cover was published. Ramon Hervey, IIRC, was the PR guy who set us up this time.)

With “Great Gosh A’Mighty (It’s a Matter of Time)” a hit from the “Down and Out” soundtrack, Little Richard was also about to release “Lifetime Friends,” his first album of all-new recordings in eight years, recorded in London that fall.

He told us, among other things, that while recovering from the crash, he decided to drop his lawsuits against Specialty Records and Art Rupe over royalties, adding they had yet to drop their countersuits.

It was mid-afternoon and the hotel restaurant was closed in the hours before dinner. But it was like his personal kitchen and dining room; the cooks and waiters served him whenever. It was a quiet spot and we got a good 45 minutes with him.

I used several clips from the interview for a series of “Earth News Radio” short features about the book and the movie, but most of the interview remained unpublished until now.

In Part 1, LR starts off responding to a question about surviving the car crash. He talks about the hundreds of bouquets of flowers and millions of get-well cards and all the love that came his way as he recuperated, from superstars like Liz Taylor, Michael Jackson, Prince, Bruce Springsteen and civilian fans around the world.

“I saw what can happen if you die, if you leave this world — I got a taste of it,” he says. “It just made me feel good (that) black fans, white fans all got together to show me love.”

Santa Clarita journalist and Grammy nominee Stephen K. Peeples was raised by career newspaper journalists and music-lovers in Miami and Los Angeles. He earned a Grammy nomination as co-producer of the “Monterey International Pop Festival” (Rhino/MIPF, 1992) box set with Lou Adler and Geoff Gans. Peeples was the original, award-winning producer of “The Lost Lennon Tapes” radio series for Westwood One from 1988-1990, and writer/producer of hundreds of WW1 programs in the preceding five years. • His first music industry gig was as an Associate Editor at Cash Box magazine in Hollywood in 1975. He went on to be a Media Relations-PR executive for Capitol Records (1977-1980), Elektra/Asylum Records (1980-1983) and Rhino Entertainment (1992-1998). • Moving online, he was Rhino’s first web editor (1996-1998), then elevated to content editor of Warner Music Group websites (1998-2001). • In the Santa Clarita Valley just north of L.A., Peeples was the award-winning Online Editor for The Signal newspaper’s website from 2007-2011, and wrote-hosted-co-produced SCVTV’s WAVE-nominated “House Blend” local music TV show from 2010-2015 (archived online and still airing in reruns). • He is now a News Editor at SCVTV’s SCVNews.com, SVP/New Media Emeritus for Rare Cool Stuff Unltd. and developing a biography of Texas artist Boyd Elder. For more info and original stories, visit https://stephenkpeeples.com/. For exclusive behind-the-scenes interviews, subscribe to Peeples’ YouTube channel.