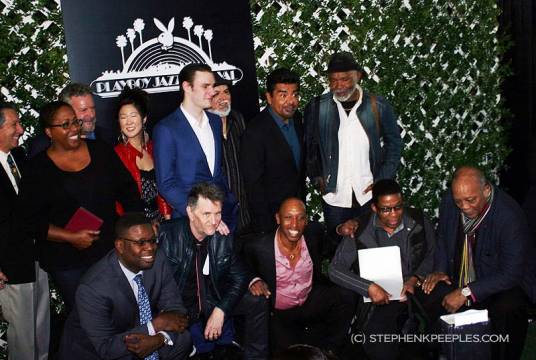 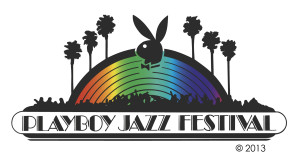 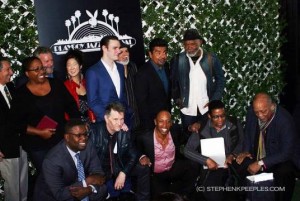 More than a dozen festival artists and about 75 select national and international media reps from as far away as Europe and Japan attended.

“I’m glad to be here,” Lopez said, stopping on the Playboy Mansion’s back porch to talk a moment before the press conference began. “It’s an exciting day. Hanging around the (Mansion), meeting Hef, being endorsed by Bill – it’s a great honor.” This reporter asked if Lopez was going to front a band at the festival, which Cosby did for years. “I’m starting auditions tonight,” Lopez said, not missing a beat. “It’ll be a wonderful mix of different styles of music. I might learn a couple guitar riffs between now and Father’s Day weekend.”

Bill decided it was time for retirement for him from the festival,” said Dick Rosenzweig, longtime Playboy Jazz Festival president. “We thought about it, searched far and wide, and decided that George Lopez was the guy. He’s been involved with music as well as comedy, he’s MC’d the Grammys, and he just seemed to be the appropriate host for the event. I think the crowds will enjoy him very much. He’s getting many tips from Bill Cosby, as you can imagine, and he, I think, is going to be a great host.”

All in the Family: Hugh Hefner and Son Cooper Hefner, The Next Generation 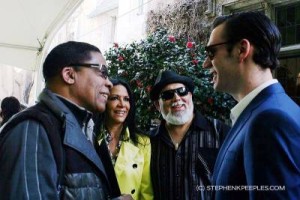 Playboy founder Hugh Hefner launched the Playboy Jazz Festival in Chicago in 1959. He moved to California and re-established the event at the Hollywood Bowl more than three decades ago. The festival has historically sold out both days, drawing about 35,000 fans to the storied outdoor venue, built in 1922.

While Hefner traditionally attends these annual press conferences announcing the festival lineup, he did not last year or this, which took place just before his 87th birthday.

Cooper Hefner, 22, the youngest son of Hugh Hefner and his second wife, former Playmate of the Year Kimberly Conrad, was on hand for the press conference. Now host of a radio show on the Playboy Channel, Cooper is set to assume leadership of Playboy Enterprises next year.

“I’m representing,” he told KHTS. “I was just a doing a little segment for Playboy Radio and they were asking if it was exciting for me to be out here, and it really is. This is not the type of music I listen to on a day-to-day basis, but it’s really cool to be a part of the Playboy Jazz Festival because it’s such an important part of our legacy. For me, when I think of going forward and the steps I want to take when I’m doing this all, it’s definitely keeping these sorts of things alive – keeping that heritage, keeping that history alive.”

So the Playboy Jazz Festival is definitely going to stay alive as long as you have anything to say about it, we asked?

“Absolutely, and I have a lot to say about it,” Cooper said.

Asked how his father’s doing and how Hef and his 27-year-old wife Crystal are getting along, Cooper said, “Dad and Crystal are doing great, they’re doing really well.”

Sheila E., noted for her work as a solo artist and bandleader, as well as sessions and tours with others including Prince, closed the festival last year, fronting her own group.

Sheila E. has many fans in the Santa Clarita Valley; she played the last two Loose Goose Wine Festivals as well as a recent Playboy Jazz Festival with the Pete Escovedo Orchestra, led by her legendary father and co-starring her brothers Juan and Peter.

Last year, she was on fire, singing and dancing, playing percussion and a full trap set — barefoot — with more power and style than most humans can muster, male or female. Her dad made a surprise appearance to sit in on timbales. Hyperbole aside, it was explosive. If the venerable Bowl had a lid, her set would have blown it clean off, which is why fans demanded promoters bring her back this year.

Another contemporary Latin Jazz star, Poncho Sanchez, is also favorite among SCV music fans who saw him and his band perform a couple seasons ago at the Santa Clarita Performing Arts Center at College of the Canyons. Sanchez was also one of the star drummers who participated in the “Rock the Rhythm — Beat the Odds” world record attempt at COC last year. Sanchez’ Playboy Jazz set will salute the music of John Coltrane, with sax great John Carter joining his Latin Jazz Band.

Single-day tickets are now on sale through Ticketmaster (ticketmaster.com or 800-745-3000) and all Ticketmaster outlets, as well as the Hollywood Bowl box office. The mailing list for box seats in the garden and terrace sections closest to the stage has been full and closed since 1987, so those fans traditionally get the first shot.

Single-day tickets in the rest of the house range from $170 “super seats” dead center behind the boxes to the $27.50 cheap seats way up at the top, where the partying gets the wildest (prices include service fees). Big-screen displays and sound towers make the sights and sounds good even in the rear sections.

For more info, call the festival hotline at 310-450-1173 or visit playboyjazzfestival.com.