Providing a home for Peeples’ current posts and other original content, the updated StephenKPeeples.com also aggregates and provides links to selected published writing and photography from his nearly 40-year career in print, records, radio, TV and the Web. 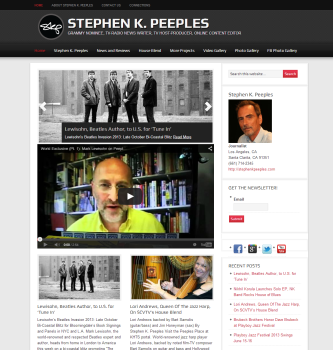 Key and Nine Eye Interactive built the basic site on a WordPress platform using a theme optimized for multimedia and social media by Genesis. Peeples and his associate producer, Paige Hagen, completed the architecture and added content migrated from the previous site, plus new original content.

“My new site is much faster, easier to navigate, and social-media friendly,” Peeples said. “Key’s deep knowledge of WordPress, search engine optimization, search engine marketing and site security gave me the confidence to focus on my strength as a content creator. Editor and organizer. Hagen’s excellent production skills were invaluable in putting it all together. We made a great team.”

Peeples promised he’s not selling anything.

“But there are many good rock ‘n’ roll reads to be found, vintage and recent, along with exclusive photos and video,” he said. “While trolling around, you might also stumble upon more about my checkerboard career as a third-generation journalist, links to my current clients and projects, plus links to my Twitter account and Facebook, YouTube and Google+ pages.”

Peeples’ WordPress site has been in development since summer 2013, as he recovered from injuries received in a major car crash (not his fault) and had a little more time off than usual.

The updated site is the latest iteration of the static single page Peeples first posted as an online business card in the late 1990s on the same domain. That was after he served as the project manager and online content producer/editor for Rhino Entertainment’s first website, which went online in 1996.

“My new site’s been a fun project so far, and will always be a work in progress,” Peeples said. “More fresh content and ‘Blasts from the Past’ from my archives to come in the weeks and months ahead. I’ve been in the game a long time, but I’m not done yet.”