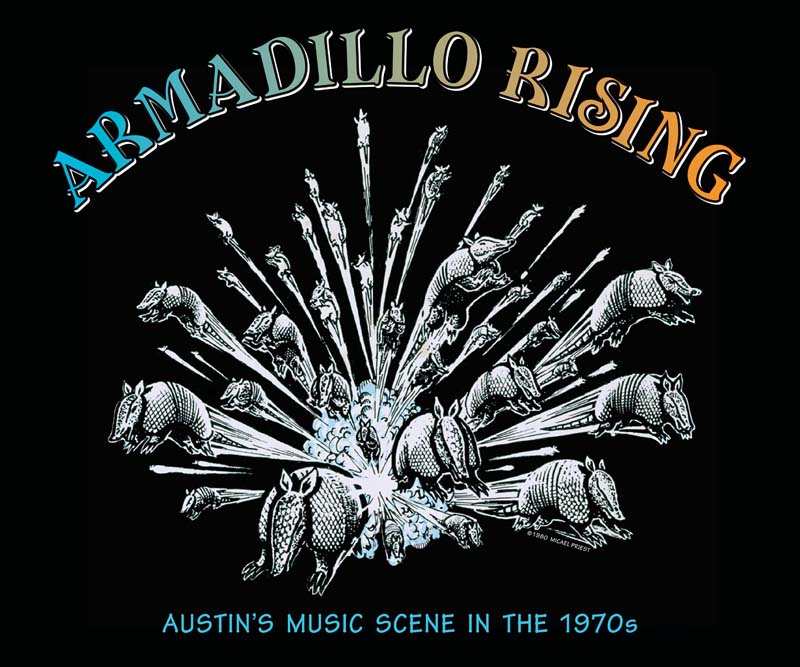 The “Armadillo Rising” event’s centerpiece was a free-wheeling and often funny panel discussion about the Armadillo World Headquarters, the music hall that was the epicenter of hippie culture in Austin from 1970-1980.

Among the notables enjoying the “Armadillo Rising” panel was the Wittliff’s namesake. Texas writer-photographer Bill Wittliff is an award-winning screenwriter of the “Lonesome Dove” miniseries in 1989 and a screenwriter on three films starring Willie Nelson (“Honeysuckle Rose” in 1980; “Barbarosa” in 1982 and “Red-Headed Stranger” in 1986). Wittliff’s passion for writing and Texas culture of all kinds drives the Collections, aided and abetted by his posse of artifact wranglers.

The event also celebrated the opening of “Long Live the Longneck!” on the same floor of the Alkek. The “Homegrown” satellite exhibit sported priceless 1970s Texas music memorabilia from the collection of Jerry Retzloff, a San Antonio native and former Austin-based district manager for the Lone Star Brewery, curated by Wittliff lead archivist Katie Salzmann and her dedicated staff.

the mid-1970s who conspired with his longtime friend Willie Nelson to help each other sell lots more Lone Star Beer and Willie Nelson records, respectively, to younger (but not underage) Texas audiences.

It was a private, handshake deal between friends; no money ever changed hands between them.

Of course, Nelson, Doug Sahm, Rusty Wier, the Lost Gonzo Band, Greezy Wheels, Ray Benson and Asleep at the Wheel, Kinky Friedman and dozens more Texas-based musicians went on to help co-brand Texas music and Lone Star Beer, aka “The National Beer of Texas,” to the benefit of all.

“Lone Star Jerry” as he’s known among Texas musicians gave the author a brief tour of his exhibit, then Salzmann detailed how his memorabilia was archived and organized for display, and how it fits in with the Wittliff’s “Homegrown” exhibit:

Franklin’s Lone Star posters were a huge hit, plastered on the walls of bars and dance halls all over the state. Original prints are now hard to find.

In an interview with the author at “Armadillo Rising,” Jim and Jerry told this reporter how the deal went down:

Also on hand at “Armadillo Rising” was another featured “Homegrown” poster art legend, Danny Garrett, as well as Boyd Elder (aka “El Chingadero”), the Texas “artlaw” who created the iconic “American Fetish” painted-and-adorned animal skull art on the covers of Eagles’ multi-million-selling “One of These Nights” and “Their Greatest Hits” albums. Elder and the author road-tripped from tiny Valentine, Texas halfway across the state to attend the event.

The “Homegrown” exhibit was on display at the Alkek Library March 1-July 3, 2015.

Find out more about “Homegrown,” “Armadillo Rising” and The Wittliff Collections here.

For more fun with Lone Star Jerry, watch the River House interview with Stephen K. Peeples from the day after “Armadillo Rising,” April 20, 2015.