“Sir Doug & The Genuine Texas Cosmic Groove,” the film documentary about Texas music icon Doug Sahm that premiered to a packed house and universal acclaim at the 2015 SXSW Film Festival in Austin in March, will premiere on the West Coast at the Cinefamily Theatre in Hollywood on Friday, July 30. 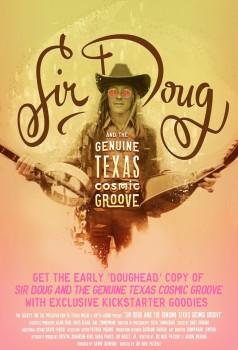 fter the 80-minute film screens, Joe Nick Patoski, the best-selling Texas music author, journalist, radio host and now director of “Sir Doug & The Genuine Texas Cosmic Groove,” will be on hand for a Q&A session about Sahm, the always movin’, always groovin’ multi-instrumentalist who busted out of Texas in 1965, fronting the Sir Douglas Quintet on the national hit single “She’s About a Mover.”

The L.A. premiere of “Sir Doug & The Genuine Texas Cosmic Groove” coincides with the deadline for donations to a Kickstarter campaign producers created to help pay for additional licensing of about 40 music tracks, so the film can open wide.

Patoski (recently named one of Variety’s 10 Documakers to Watch) and his collaborators — Executive Producer Louis Black, Executive Producer Alan Berg, Producer Dawn Johnson — and the Austin-based Arts + Labor film production company, got the film completed over the past three years with funding in large part from the nonprofit Society for the Preservation of Texas Music.

Right now, all the music is in the film, but licensed only for screenings at film festivals. Until/unless the Kickstarter campaign hits $75K by 10 a.m. PT July 30, the rockumentary will remain limited to the festival circuit. 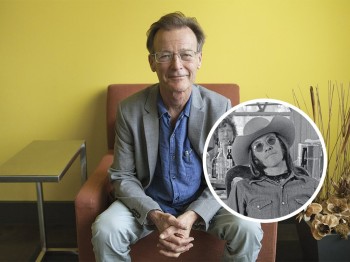 On Sunday, Patoski hosts a screening and fundraiser as part of the Big Sky Film Fest summer series at the Top Hat Theater in Missoula, Montana.

Originally from Fort Worth, Patoski met Sahm in Austin — the only place in Texas longhaired hippie musicians could live without getting beat up by rednecks — in 1973. The writer and rock star remained friends and occasional co-conspirators on the Texas music scene until November 1999, when Sahm died of a heart attack less than two weeks after this 58th birthday, in a motel room on a road trip to New Mexico.

Patoski, who’s written for the New York Times, Rolling Stone and Texas Monthly and is author of several well-received books about Texas music and culture, is eminently qualified to tell Sahm’s multifaceted story the way it was, and does so as only a fellow Texan could do. 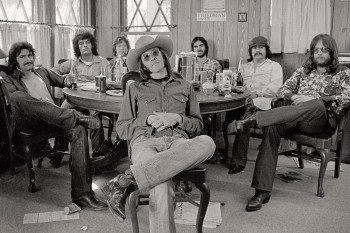 “Doug Sahm was authentic, whatever style he played,” Patoski said on the phone from Austin on July 9. “And no single player I’ve heard in my 40 years of writing about music and listening to it here in Texas has done what Doug did, as far as being able to play all the forms of Texas music and play them authentically. He was the real deal. There was no bullshit in what he did.”

“I’ve written books on Willie Nelson and Stevie Ray Vaughan and Selena, and the Dallas Cowboys, but I couldn’t have written a book on Doug,” Patoski said. “People have to hear him. They have to hear him talking and figure out what a character he is. But they have to hear his music to really realize this guy was that talent. And to me, if you’re interested in Austin, he’s that part of the Austin creation myth. If not for Doug, we wouldn’t be talking about Austin music.”

Patoski, who scripted “Sir Doug & The Genuine Texas Cosmic Groove” with Jason Wehling (who will also join Patoski for the L.A. Q&A), paints a vivid portrait of Sahm’s life and enduring legacy,  through Sahm’s music and 55 interviews with former bandmates, musician friends, members, and others who knew him best. It’s very much an oral as well as an aural and visual history.

The movie traces Sahm, born Nov. 6, 1941, in San Antonio, from childhood in the late 1940s and early 1950s, when he emerged as a country music prodigy while still a schoolkid, playing fiddle, mandolin, guitar, and triple-neck steel guitar, with encouragement from no less than honky-tonk godfather Hank Williams, as well as other well-known Texas musicians of the era.

Six-year-old “Little Doug Sahm” made his radio debut performing “Teardrops on My Heart” on the KMAC “Stars Over San Antonio” program. When he was 9, the Musicians’ Society of San Antonio granted him an honorary union card permit. And at 11, he performed with his hero Hank Williams at Austin’s famed Skyline Club, and by 17 was a regular at the Tiffany Club leading his own bands.

We see how Little Doug Sahm grew into a wild, rebellious teenaged R&B bandleader who started recording local singles at age 14, and who caused a riot at his San Antonio high school, and within a couple of years would be a world-famous rock star fronting the Sir Douglas Quintet, hanging out with other famous rock stars like Bob Dylan as early as 1966.

“Doug was like me, maybe the only figure from that period of time that I connected with. His was a big soul.” — Bob Dylan

How Sahm, his Texas bandmates and his Houston-based manager, Huey P. Meaux (aka “The Crazy Cajun”) bamboozled the radio and record industries and fans into thinking the Sir Douglas Quintet was from England when the single was released (Vox organ sound and Carnaby Street duds), and how the band was outed on national TV, are just a couple of the wild stories detailed in this very colorful celluloid saga.

In 1966, Sahm was busted with a small amount of marijuana in San Antonio, and was given a suspended sentence and orders to get outta town. 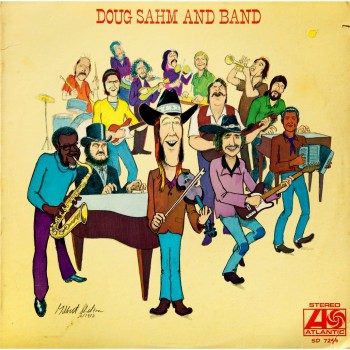 “Doug landed in San Francisco just in time for the Summer of Love in 1967,” Patoski writes on the Kickstarter page.

During the late ’60s, Sahm was an integral part of the West Coast counterculture music scene and scored one of the biggest hits of his career with “Mendocino.”

The film details how Sahm was a major catalyst and instigator in the Texas and national music scenes from the late 1950s until his death in 1999, of a heart attack, at age 58. He musically bridged the gaps between hippies, rednecks, cowboys and Hispanics, not just in Texas, but in California, New York, Scandinavia, and just about everywhere else he went.

Songwriting icon Bob Dylan was one of Sahm’s biggest fans, from the mid-1960s Sir Douglas Quintet days on. In late 1971 Dylan guested on the legendary “Doug Sahm and Band” sessions with renowned producer Jerry Wexler (Atlantic Records co-founder and Aretha Franklin’s producer), released on Atlantic in 1973.

(Texas trivia: As the story goes, Wexler asked Sahm what other artists he (Wexler) should sign to his new Atlantic Nashville label. Sahm suggested Willie Nelson. It was done. Wexler and Nelson recorded the epic “Shotgun Willie” and “Phases & Stages” albums in 1973 and ’74.

(After that, Nelson signed with Columbia, released “Red-Headed Stranger” in ’75, and he’s been a superstar even since. Nelson is now rightly revered as a national treasure. Credit goes to Doug Sahm for his role in helping to making that happen, though Nelson became far more famous than Sahm after ’75.

Over the years, Sahm’s fans and friends included other kindred restless creative spirits like Nelson, Ray Benson and Asleep at the Wheel and countless other musicians who made their own ways to Austin in Sahm’s wake at the dawn of the 1970s.

Patoski continues: “He returned to Texas as the cowboy hippie rocker who built a burgeoning music scene in Austin before forming the Tex-Mex super group The Texas Tornados.

“A kinetic, quirky character with a solid sense of place as well as an innate wanderlust, Doug Sahm’s story is the story of Texas Music.”

Sahm’s real-life adventures are the stuff of legend, and they’re genuinely depicted in “Sir Doug & The Genuine Texas Cosmic Groove.”

Patoski said his ulterior motive in making the documentary is to get Doug Sahm inducted into the Rock ‘n’ Roll Hall of Fame.

“All the info for this Kickstarter (campaign) and the link to sign the petition to get Doug into the Rock ’n’ Roll Hall of Fame, whether you back this film or not, is at this link,” he said.

Showtime July 30 at the Cinefamily Theatre on Fairfax in Hollywood is 7:30 p.m. Tickets are $12 for adults and free for members.

Special thanks to Marcus Rigsby for the transcription.

++++++++++++++++++++++++++++
Santa Clarita journalist Stephen K. Peeples is a Grammy nominee, and an entertainment reporter for Santa Clarita television station SCVTV and its website SCVNews.com, and Santa Clarita radio station KHTS AM 1220 and its website HometownStation.com. He was the award-winning writer-producer of “The Lost Lennon Tapes” radio series for Westwood One in 1988-1990, and hosted and co-produced SCVTV’s WAVE-nominated  “House Blend” music and interview show for five seasons, 2010-2015, creating 69 shows spotlighting local artists performing their original material. He blogs at his personal site, https://stephenkpeeples.com.