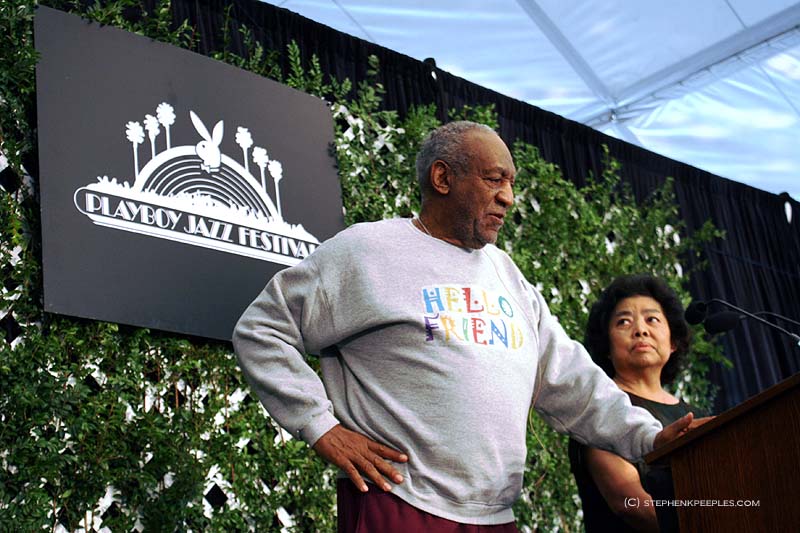 Dr. William H. Cosby, the famed comedian, Grammy-winning recording artist, author, philanthropist, community activist and educator, will intro the artists this weekend for his 31st turn as emcee of the Playboy Jazz Festival, but for the last time, according to a statement released by the festival.

After the weekend, Cosby will have been the emcee for all but three of the festival’s 34 years. The statement did not say why Cosby was passing the microphone, or to whom.

Cosby’s often said he’s had the best seat in the house, grooving in the wings just off the stage between introductions as the artists performed their sets.

“I salute all those who met at the Hollywood Bowl in June every year for two very special weekend days of jazz,” he said in the statement.

“Our good friend Bill Cosby has been a stalwart contributor and huge fan of jazz and this festival in particular, over the past 31 plus years,” said Dick Rosenzweig, the festival’s president emeritus.

“Not only has he hosted the event with great panache, knowledge and enthusiasm, he has also put together some of the finest groups that have performed at the festival,” Rosenzweig said. “His presence brought a very special excitement to both fans and artists. We have been incredibly fortunate over the years to have had a star of his caliber be so dedicated and willing to give so generously of his time and support year-after-year. He will always be part of the festival family.”

In 1995 Cosby decided to form his own group, The Cos of Good Music, featuring a handpicked band of stellar musicians. The lineup varied from year to year, often presenting up-and-coming young artists along with well-known musicians, some of whom became regulars. Cosby often conducted the group onstage, sometimes sitting in on the drums, enjoying himself and entertaining fans in the process. Fans looked forward to the group’s annual appearance and The Cos of Good Music became a highly anticipated staple of the show over the past 16 years.

“Bill Cosby has been a dear friend since the 1960s and it’s been a real pleasure for me, personally, to have him play such an integral part in what makes this festival so special,” said Hugh Hefner, Playboy founder and the festival’s executive producer. “His great comedic talent and his passion for jazz, exemplified by his own band, the ‘Cos of Good Music,’ have made his contributions to the continued success of this event  immeasurable.”

“Playboy Jazz fans will surely miss his familiar and charismatic presence in his customary seat on stage right, enjoying the music, often sitting in with a cowbell or shaker or just waving a white hankie to start a New Orleans second line or a long,winding conga line,” Chan said.

Historically, both days have sold out before the weekend, drawing around 35,000 fans. What tickets remain are available through Ticketmaster (ticketmaster.com or 213-365-3500) and all Ticketmaster outlets.

For more info, call the festival hotline at 310-450-1173 or visit playboyjazzfestival.com or the festival’s official Facebook page.

Return to the Peeples Place at KHTS front page.
+++++++++++++++++++++++
In addition to his “Peeples Place at KHTS” blog, Stephen K. Peeples is a writer/reporter for KHTS News (www.hometownstation.com) and SCVNews.com, and host, writer and co-producer of the weekly “House Blend” music and interview television show on SCVTV, community television for the Santa Clarita Valley (www.scvhouseblend.com). A former SCV music and entertainment columnist for The Signal (2004-2011) and drummer with SCV jazz group RainTree (www.raintreejazz.com, 2010-2011), Peeples is a Grammy-nominated record producer (“Monterey International Pop Festival,” MIPF/Rhino, 1992), an award-winning radio producer (“The Lost Lennon Tapes,” Westwood One, 1988-1990) and an award-winning online editor (The Signal website, 2007-2011). For more information, email stephen@hometownstation.com or visit www.stephenkpeeples.com.