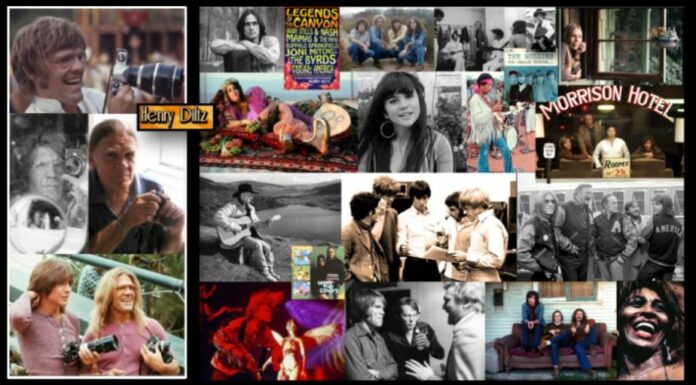 Legendary rock photographer Henry Diltz and celebrated multidisciplinary graphic artist John Van Hamersveld will be in conversation for the first program of the Library After Dark series “Music Icons” on Friday, January 31, 2020, from 7 p.m. to 9 p.m. at the El Segundo Public Library.

Born in Missouri and raised in New York and various overseas locales including Hawaii (his father was a film producer for the State Department), Diltz has photographed many of the artists who’ve created the musical soundtrack for generations.

Henry’s first passion, though, was music. He was a co-founder of the Modern Folk Quartet in Hawaii in 1962, which over the next few years recorded a couple of albums for Warner Bros. and toured the nation’s club, college and concert circuits. 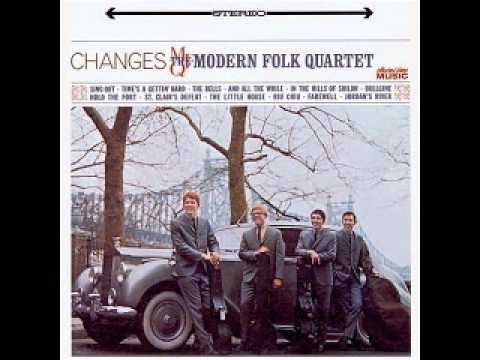 MFQ’s cover of Harry Nilsson and Phil Spector’s “This Could Be the Night” was produced by Spector in 1965, the same year Henry played banjo on Bob Lind’s hit single “Elusive Butterfly.”

Henry fell into photography on MFQ’s final tour in early 1966. He bought a second-hand Kodak Pony camera for $20 at a thrift shop in rural Michigan, just for something to do between gigs.

“Cyrus [Faryar] in our group bought us all film, handed me a roll and said, ‘Here’s yours.’ I had no idea it was slide film,” Diltz said in the interview he and this writer did for his book “Unpainted Faces” in 2011, excerpted below:

At first, Henry had no clue what to do with the camera, either.

“I just read the information that came with the box of film, saw the settings it called for, figured out how to adjust the settings on the camera, and took it from there,” he said. That was all the training he would ever need.

For the next few weeks, Diltz and his bandmates photographed each other doing everything they did, and once back home in Hollywood, they couldn’t wait to get their film developed.

“When I got mine back, I was surprised to see they were all slides,” he said. “So we said, ‘Let’s have a slide show!’

“We all got together at Ron Jacobs’ house – he was the program director of [Los Angeles Top 40 radio station] KHJ and a very good friend, and we had this huge slide show. When I saw the first slide hit the wall, I thought, ‘This is absolute magic,’ that we could replay those scenes we had all just gone through in this huge, glowing fashion.”

Diltz immediately planned another slide show and started shooting more pictures of his friends. Because Henry was one of them, not a pesky press photographer, and he was fun to be around, he had unprecedented access in intimate moments.

“I wanted to get images that would entertain my friends,” he said. “During the next several weeks I constantly photographed them, their pets, old cars – just about everything I saw. Many of my friends were musicians: Stephen Stills, David Crosby, Mama Cass, Linda Ronstadt. They didn’t see me as a photographer. I was just the same guy that had always been a part of the music scene, so they didn’t put their guard up, and this allowed me to take very natural pictures.”

Diltz traces his inevitable transition from amateur to pro to an unplanned Buffalo Springfield photo he took in 1966.

“Stephen [Stills] asked me along to a soundcheck at a club down by the beach, so I went along to get some new slide show pictures on the beach while they were in the club,” he said. “A little while later, I was taking a picture of a giant painting on a wall on the back of the club, when the band came walking out. I asked them to stand in front of the painting and wound up taking the first ‘group shot’ of my life.”

Soon after, he said, an editor from Teen Set magazine called. “They heard I had taken this picture of Buffalo Springfield and offered to pay me $100 to publish it,” he said. “I could hardly believe someone would pay me to do what I loved. That was the simple way my career as a photographer began – all by accident.” 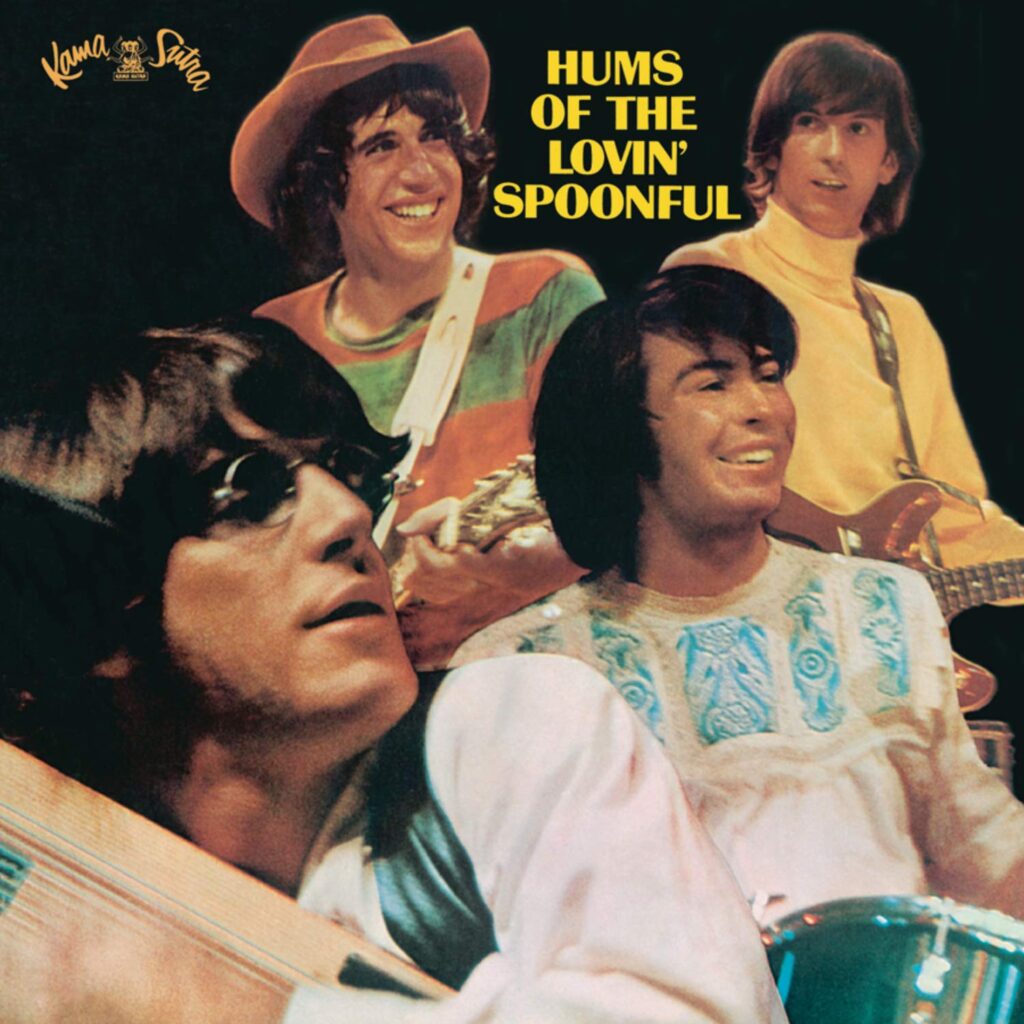 Before long, Diltz was shooting more publicity photos and album covers for other friends as they became famous, including Joni Mitchell, Jackson Browne and many more.

It’s led to an eventful life. In his six decades behind the lens, Diltz has toured with most of rock’s royalty, contributed photographs to countless books and publications, and appeared on numerous music recordings.

Not to mention that he was the official photographer at the Monterey International Pop Festival in 1967 as well as at all three Woodstock festivals in 1969, 1994 and 2009.

In 2001, Henry partnered with some friends to form the Morrison Hotel Gallery to showcase and represent his own work and fine-art music photography by a handful of others.

Today, with locations in Soho, on the Sunset Strip and on Maui, the Morrison Hotel Gallery also represents the work of more than 125 renowned photographers.

“Sometimes, if you don’t get in your own way, life will unfold as you never imagined,” Henry said. 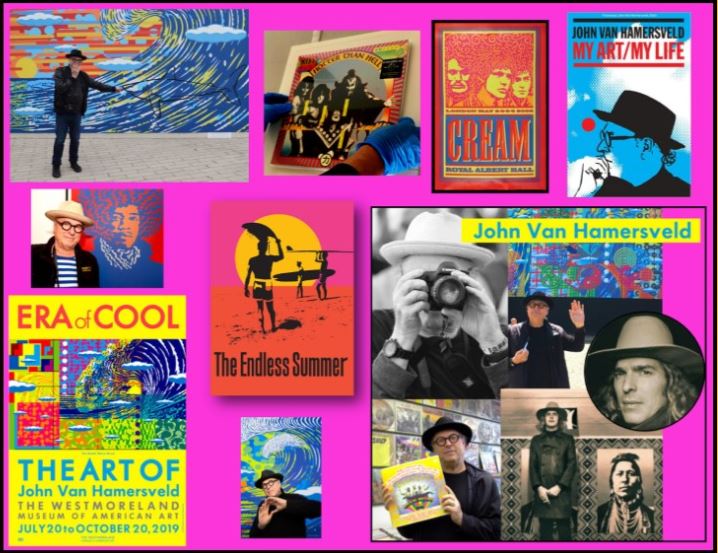 While Henry Diltz is famous for his iconic album cover photography of famous music artists, multidisciplinary artist John Van Hamersveld is famous for his commercial packaging and campaigns for record covers and artists.

In a career of 60 years and counting, his graphics represent a vivid visual history of the “Era of Cool” in Southern California and the Southwest in a style he calls “post-future.”

For Baltimore-born Van Hamersveld, whose family moved to Southern California when he was 9, it started with surfing and surf-related graphics. 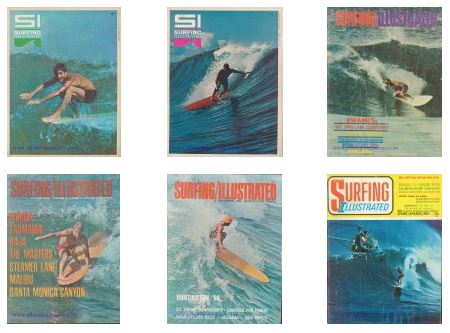 He published his own surfing magazine, “Surfing Illustrated,” in 1962, then joined Surfer Magazine as the assistant to publisher John Severson.

Van Hamersveld later studied at the Chouinard Institute of Art in Downtown Los Angeles, and in early 1967, he joined Capitol Records Distribution Company as designer of commercial record packages and marketing campaigns. He worked on artwork and campaigns for albums by Capitol artists including The Beach Boys and The Beatles.

A year later, he left to form his own production company, Pinnacle Dance Concerts, and oversaw the design of the psychedelic posters and lightships for the Pinnacle Shrine Exposition Hall shows for a year, including a memorable February 1968 concert by Jimi Hendrix. 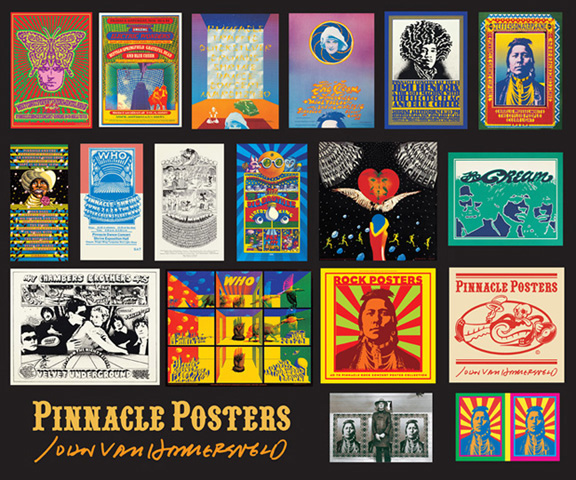 Over the next couple of decades, John also created renowned poster art and album design for The Rolling Stones, Blue Cheer, Kiss, Steve Miller, Blondie, The Grateful Dead, The Fabulous Thunderbirds, and Cream, to name but a few. 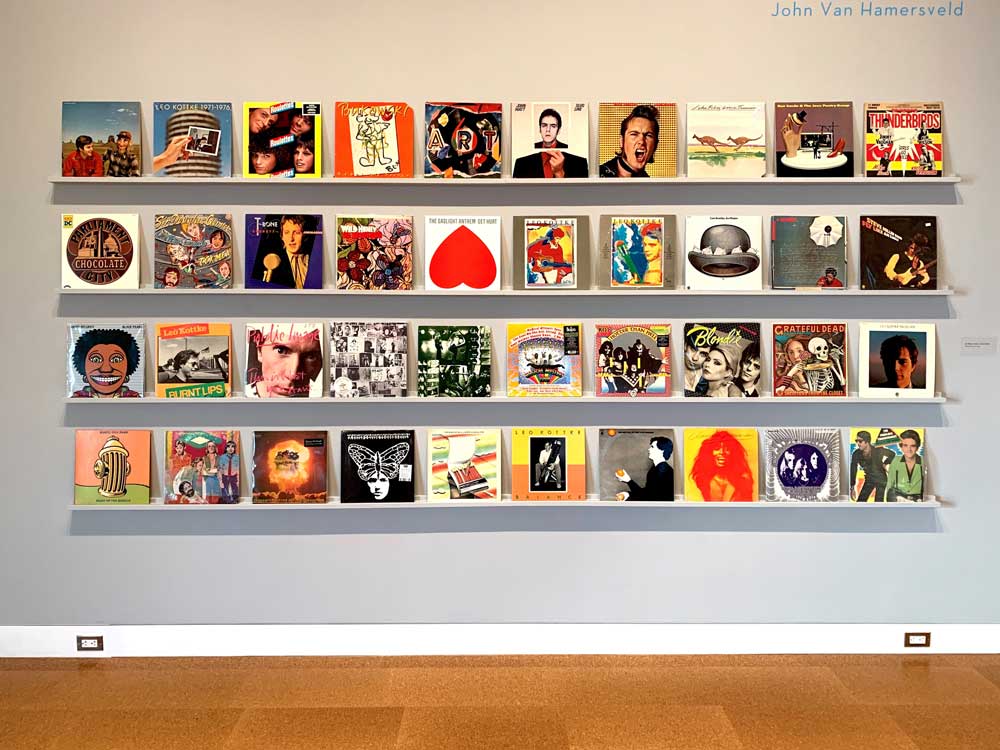 Along with fellow art visionaries Norton Wisdom, Dave Tourjé, Chaz Bojórquez and Gary Wong, John is a member of a collective calling themselves the California Locos. 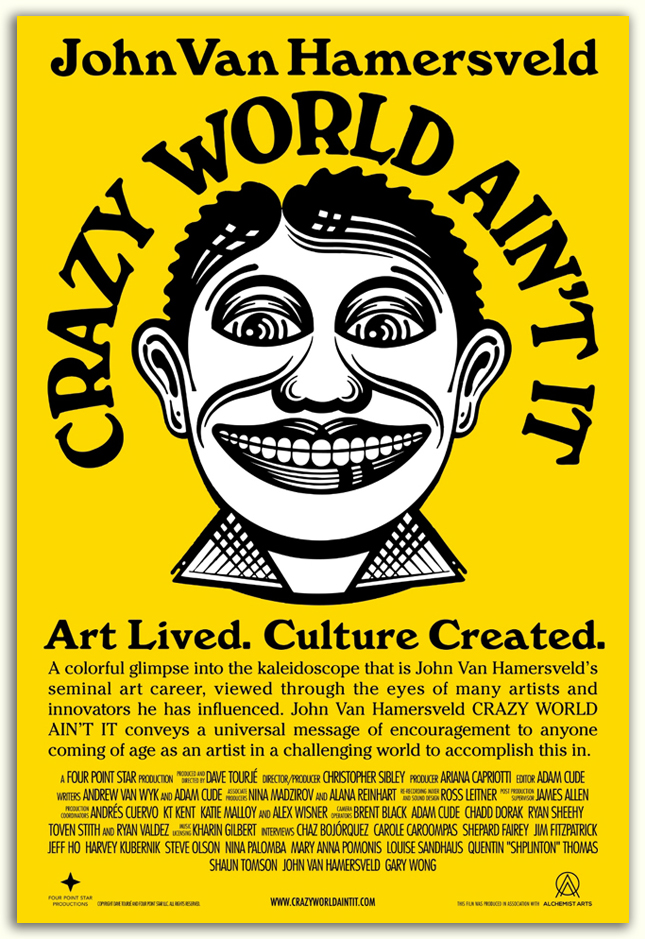 “I am working in contemporary ways in three different categories of business and exhibiting in shows,” Van Hamersveld said in mid-January. “The record cover-making is a secondary business left to fail in a dominant digital internet world. Record covers are not a business for me today.

“But, there are people all over the world consuming album products from 50 years ago,” he said, adding, “I don’t own the work I did from 20 years ago.” 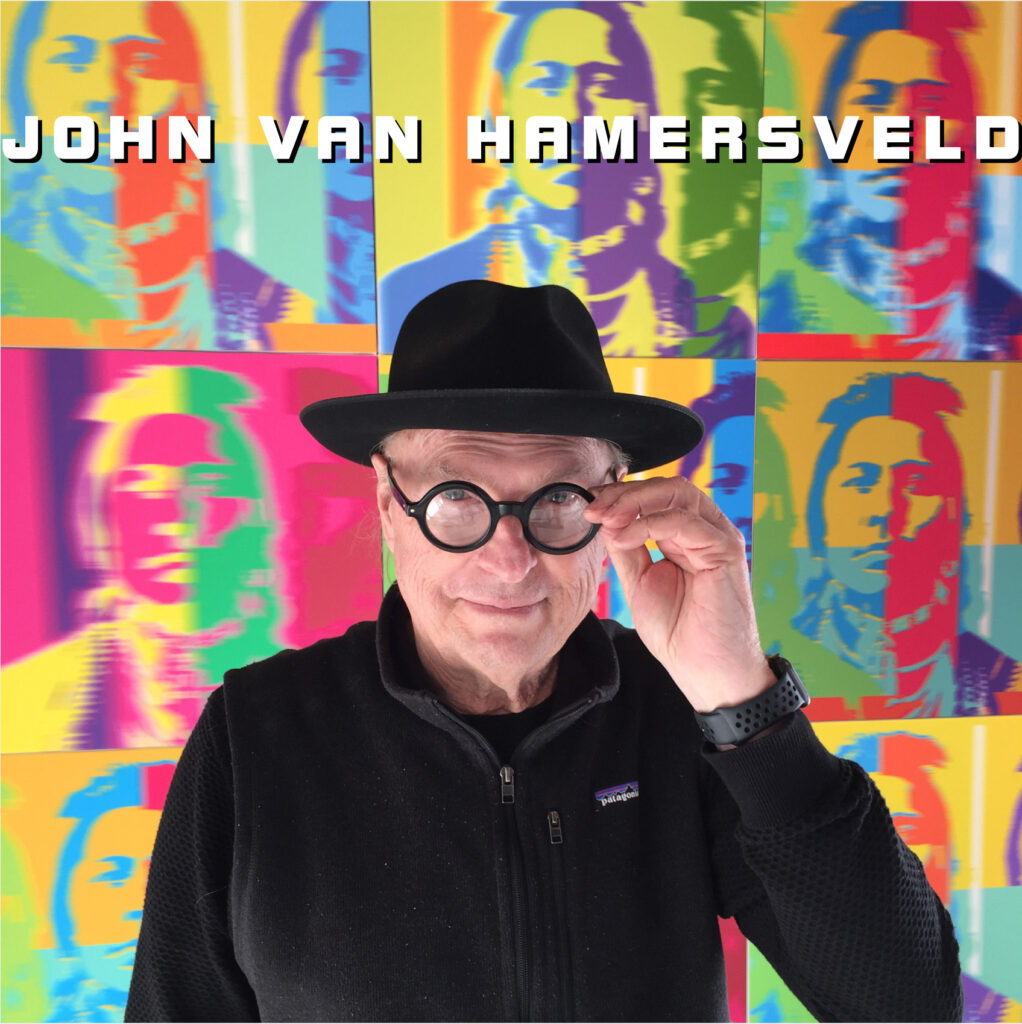 An alumnus of El Segundo High School (1959), Van Hamersveld’s more recent celebrated public and private works include the DWP tank mural, which can be enjoyed on Grand Avenue overlooking the beach he once surfed growing up.

On January 31, Henry and John will discuss their artistic careers and experiences working with many of the most iconic music artists of the 1960s and 1970s including The Doors, Crosby, Stills, Nash & Young, James Taylor, Hendrix, The Beatles, The Stones, Linda Ronstadt, Queen, Bob Dylan, Eagles, The Grateful Dead, Kiss and many, many more.

Both artists will have samples of their work on display during the event.

Moderating the program will be veteran music industry writer/editor/producer Stephen K. Peeples, who has a long history with both Diltz and Van Hamersveld.

He co-produced the Grammy-nominated box set of music from the “Monterey International Pop Festival,” was writer/producer of Westwood One‘s “The Lost Lennon Tapes” radio series, and more recently has worked in television as a writer/editor, host and producer.

In 1978, Stephen introduced Henry to Capitol co-worker Peter Blachley, who in 2001 would become one of Morrison Hotel Gallery’s co-founders.

Years later, Stephen was the editorial director of Henry’s 2011 book “Unpainted Faces.” He is writing a biography of Texas “Artlaw” Boyd Elder, a contemporary of Henry’s, John’s and Stephen’s, and best-known for his painted animal skulls adorning covers of multimillion-selling albums by Eagles and others.

In 1983, Stephen was editorial director of a Westwood One 10th anniversary advertorial published by Billboard, and Van Hamersveld designed the book’s front and back covers and laid out the interior pages.

The above article was based on a press release issued by the El Segundo Public Library. Special thanks to the library’s Roz Templin for her program photo collages. 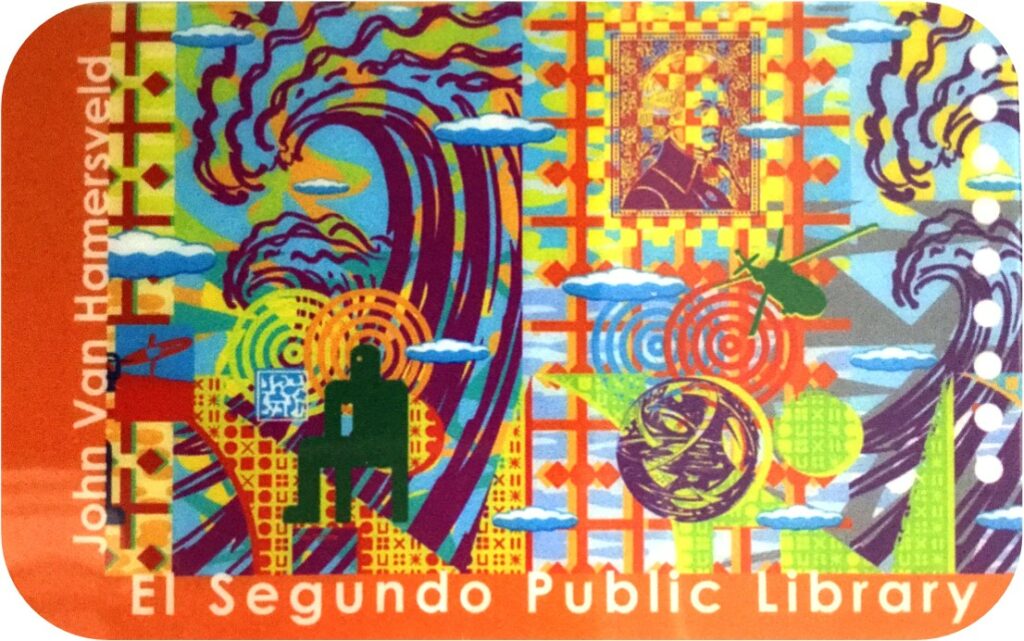 Santa Clarita journalist and Grammy nominee Stephen K. Peeples was raised by career newspaper journalists and music-lovers in Miami and Los Angeles. He earned a Grammy nomination as co-producer of the “Monterey International Pop Festival” (Rhino/MIPF, 1992) box set with Lou Adler and Geoff Gans. Peeples was the original, award-winning producer of “The Lost Lennon Tapes” radio series for Westwood One from 1988-1990. His first music industry gig was as an Associate Editor at Cash Box magazine in Hollywood in 1975. He went on to be a Media Relations-PR executive for Capitol Records (1977-1980), Elektra/Asylum Records (1980-1983) and Rhino Entertainment (1992-1998). Moving online, he was Rhino’s first web editor (1996-1998), then elevated to content editor of Warner Music Group websites (1998-2001). In the Santa Clarita Valley just north of L.A., Peeples was the award-winning Online Editor for The Signal newspaper’s website from 2007-2011, and wrote-hosted-co-produced SCVTV’s WAVE-nominated “House Blend” local music TV show from 2010-2015 (archived online and still airing in reruns). He is now a News Editor at SCVNews.com, SVP/New Media Emeritus for Rare Cool Stuff Unltd., and developing a biography of Texas artist Boyd Elder. For more info and original stories, visit https://stephenkpeeples.com/. For exclusive behind-the-scenes interviews, subscribe to Peeples’ YouTube channel.