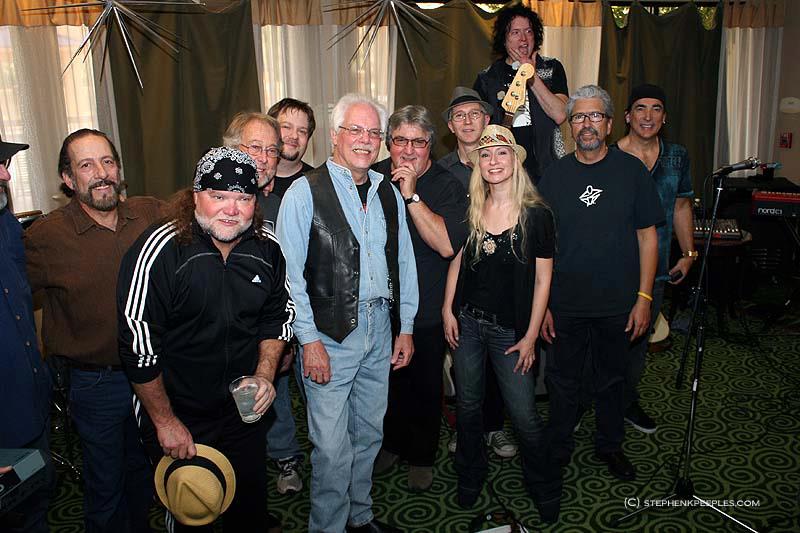 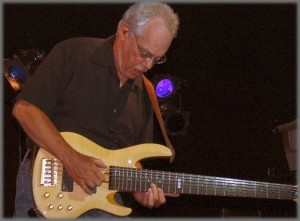 This is a preview of the March 2012 Tim Bogert bash; a recap follows with a link to photos from the event.

You can nurse your St. Paddy’s night hangover at the Courtyard by Marriott in Valencia on Sunday afternoon from 4 p.m. to 5 p.m.

It’s a free, all ages show, a one-off special event that will never happen again.

A few years ago, Bogert, affectionately known among fans, friends and collaborators alike as the “God of Thunder,” was a founding member of Santa Clarita Valley rock band The McGrath Project.

“Tim is a dear friend and inspired me to create The McGrath Project, and has been such an important figure in my life as a friend, mentor and partner,” said McGrath, a two-time Grammy-winning producer as well as a songwriter, guitarist, singer and bandleader, and instigator of the Courtyard event.

“Tim’s retiring from live performance — he has actually been retired for a while,” McGrath said. “So I have put together this show…he doesn’t know it’s for him, he just thinks it’s a regular Gary show so we can play together one last time.” 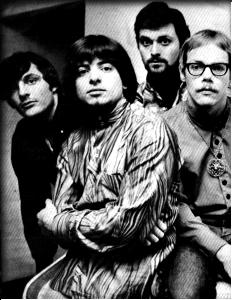 Bogert was a founding member of East Coast proto-metal band Vanilla Fudge (in the PR photo at right, he’s wearing glasses), which earned early notoriety for heavy-ing up The Supremes’ “You Keep Me Hanging On” and opening shows for Jimi Hendrix and The Doors in 1968. On Vanilla Fudge’s first headlining tour, Led Zeppelin was the opening act.

“We were untouchable,” Bogert recalls. “We always wondered who would be the band to knock us off our game. It was Zeppelin.”

Search all those bands and guys on YouTube and you’ll get a slew of classic performances from the era, including on TV shows like “The Ed Sullivan Show” and “The Mike Douglas Show.”

“Tim has meant a lot to a lot of people from not only being a living-legend bass player, but also from teaching bass and voice at The Musicians Institute in Hollywood for 18 years,” McGrath said. “He had thousands of loyal students. Today, almost 15 years later, he still gets e-mails and calls from his students thanking him.”

Tim Bogert was inducted into the Hollywood Rock Walk of Fame in 1999. In 2004, Bogert joined with McGrath to form the first iteration of The McGrath Project.

“Gary writes great pop tunes which allow me to be that creature that is Tim Bogert, plus he makes me laugh all day,” Bogert said back then. He played bass on the band’s eponymous debut album, and on 2010/2011’s two-album set “Love is a Four Letter Word,” which spawned a handful of singles and earned an international gold record.

But Bogert opted out of live performing early on. He’d had a bad motorcycle accident, and standing onstage for long periods of time was sometimes difficult.

So why is McGrath staging this bash now, already a few years into Bogert’s “retirement” from the stage?

“I wanted to do something for him to show him how much he means to people,” McGrath said. “As you know, musicians don’t retire, they just become hermits. (But) even if (he’s) in pain from his horrific motorcycle crash, he can still play. Tim introduces me to people as his son. And he means as much to me as any father could. So instead of throwing him a surprise birthday party or something lame like that, I called people who Tim has told me he loves playing with.”

Every musician on the stage on Sunday afternoon has been a member of The McGrath Project or played on its records and worked with Bogert at one time or another.

That includes special guest Spencer Davis, a mutual friend whose mid-’60s British Invasion hits like “Gimme Some Lovin,'” “Keep on Running” and “I’m a Man” are still heard on the radio.

“I have always been a fan of good songwriting and musicians and Tim Bogert is one of my best and dearest friends,” said Davis, who played on “Believe,” which opens the second McGrath Project album. “I have known Gary for a few years now and have created a wonderful friendship with the lad. And when he asked if I would do a secret show to be a surprise for Tim, I couldn’t refuse.”

“I’ve played with Tim in both the formation of The McGrath Project and on a regular basis at what used to be the open blues jams at Cozy’s in Sherman Oaks,” said Bryan Head, who now plays with Foreigner and Supertramp. He’s also worked with Shelby Lynn, Dave Navarro, Hillary Duff and Jill Sobule, and extensively with Dick Dale. “Tim always brought a sense of class to the night. It truly was watching a master craftsman.”

“I feel very honored and privileged to be a part of this event, paying tribute to not only a living legend, but also a dear friend,” said Ann-Marita Garsed, who joined The McGrath Project in time for its second album, and is also a solo artist. (The McGrath Project’s third album, “Boom,” is set for release in April.)

McGrath alum Phil Parlapiano, who plays a dozen or more instruments, and fronts his own band, The Medicine Men (check them out on “House Blend” on SCVTV, hosted by yours truly), has also worked with Toad the Wet Sprocket (“Pale”), Jon Bon Jovi (“Blaze of Glory”), Rod Stewart (“Unplugged”), James Cameron’s mega-blockbuster film “Titanic” (in the Irish band in the party scene), The New Radicals (“One Have One”), Social Distortion (a DVD of live stuff from 2005-2010), Tracy Chapman (live on “Austin City Limits”), and just about everything John Prine has recorded (Prine nicknamed Parlapiano “Mr. Squeeze” for his prowess on accordion).

Asked before the show if there’d been any rehearsing, Parlapiano grinned. “Yeah, for about five minutes, out in the parking lot.”

“I really enjoyed it,” Bogert said after the set, which lasted just a bit longer than an hour, and attracted 50-75 enthusiastic fans. “I wasn’t expecting all these guys. Great players,” he said. It was the first time he had played a gig in a year, since March 2011.

+++++++++++++++++++++++
Stephen K. Peeples in March 2012 was a writer/reporter for KHTS News (www.hometownstation.com) and SCVNews.com, and host, writer and co-producer of the weekly “House Blend” music and interview show on SCVTV (www.scvhouseblend.com). A former Santa Clarita Valley music and entertainment columnist (The Signal, 2004-2011), and drummer with on-hiatus SCV jazz group RainTree (2010-2011), he is a Grammy-nominated record producer (“Monterey International Pop Festival,” MIPF/Rhino, 1992), an award-winning radio producer (“The Lost Lennon Tapes,” Westwood One, 1988-1990) and an award-winning online editor (The Signal website, 2007-2011). For more information,  visit www.stephenkpeeples.com.