Jazz pianist, producer, and promoter George Wein, who pioneered the modern music festival format in the ‘50s and by the ‘80s was the world’s leading jazz impresario, died Monday, September 13 in his Manhattan apartment. He was 95.

After serving in the Army in World War II, Wein graduated from Boston University’s College of Liberal Arts in 1950 and opened the Storyville jazz nightclub and record label the same year. By booking talents such as Billie Holiday, Ella Fitzgerald, and Charlie Parker, Wein developed the Boston club into a must-play, must-visit jazz destination.

In July 1954, Wein broke jazz out of the clubs and onto the larger outdoor summer festival stage when he founded the Newport Jazz Festival in Rhode Island. He produced the event, with funding from Storyville patrons Louis and Elaine Lorillard and his wife Elaine, the tobacco empire heir and his socialite wife, who put up $20,000.

The Duke Ellington band’s historic set in 1956 is often cited as one of the most memorable events in the festival’s early years.

In a breakout segment backed just by Ellington on piano, Jimmy Woode on bass, and Sam Woodyard on drums, tenor sax player Paul Gonsalves blew an improvised solo connecting Ellington’s classic “Diminuendo” and “Crescendo in Blue” that stretched 27 choruses, lasted more than five minutes, and had the crowd dancing in the aisles.

The performance and the resulting “Ellington at Newport” live album recorded and released by Columbia Records were milestones in the Duke’s latter-year career, and helped put the festival in the far northeast corner of the U.S. on the map.

Wein branched out with the Newport Folk Festival in 1959, where Bob Dylan infamously went electric on July 25, 1965, witnessed by a crowd of an estimated 100,000 folk fans who weren’t expecting it.

“The audience, which was shocked into silence for a moment, quickly began to register its disapproval,” Wein recalled in “Myself Among Others: A Life in Music,” his 2004 memoir. “People began booing; there were cries of ‘Sellout!’”

It was Wein who coaxed Dylan back out onstage with an acoustic guitar for one more number, hoping to calm down the crowd. Dylan chose to sing “It’s All Over Now, Baby Blue.”

As he wrote, Wein’s forays into booking rock acts at Newport like Jethro Tull, Led Zeppelin, and Sly & The Family Stone in 1969 were less than fun. Particularly disastrous was booking the Allman Brothers Band for the 1971 festival, which was overrun by overly enthusiastic rock fans and led local officials to put the festival on hiatus for several years.

Wein founded Festival Productions Inc. in 1969, and FPI launched the New Orleans Jazz & Heritage Festival in 1970. The company pioneered corporate sponsorships for festivals, including the Playboy Jazz Festival in Los Angeles in 1979, and produced the multi-city, international Kool Jazz, Essence Music, and the JVC Jazz festivals.

By the 1980s Wein was staging more than 50 music festivals around the world each year and keeping more jazz musicians working than any other promoter.

The Jazz Journalists Association named his memoir 2004’s best book about jazz, and in 2005, the National Endowment for the Arts named Wein a “Jazz Master,” the nation’s highest honor for jazz. He was an executive board member for Jazz at Lincoln Center and honorary trustee on the board of Carnegie Hall, and received an honorary Grammy Award in 2014.

With appearances on more than three dozen recordings over the years, including 12 as a bandleader, Wein was still performing well into his 80s, leading performances by the Newport All-Stars in the U.S., Europe, and Japan.

As recently as 2020, when COVID prompted the cancellation of live music including the Newport Jazz Festival, Wein was introducing talent from his Manhattan living room, including Mavis Staples.

Wein had no immediate surviving family. His wife and business partner, Joyce Alexander, died in 2005. She played a key role in every festival Wein produced, according to his official Festival Productions bio in 2007. They had met in 1947 and finally married in 1959, overcoming years of resistance from their families because he was Jewish and she was African-American.

Via social media, the jazz community expressed its grief about George Wein’s death:

Jazz music along with contemporary American music has lost one of its greatest champions. George Wein brought his genuine love and passion for music to everything he did and deeply impacted the rich tapestry of popular American music for the better. We’re all greatly indebted. pic.twitter.com/vxeRuWrjV9

It is with immense sadness that we let you know of the passing of our founder and north star, George Wein. We have all lost a giant champion of jazz, art, philanthropy, and equality. There will never be another like him. Rest easy, George. #georgewein https://t.co/1AMOzOtq86 pic.twitter.com/8NEGu0Wc19

The Louis Armstrong House Museum is sad to hear that legendary impresario George Wein has passed away age 95. An Armstrong fan from the beginning, he booked the trumpeter at his Boston nightclub Storyville in the 1950s and regularly featured him at the Newport Jazz Festival. 1/2 pic.twitter.com/1bpyxZpHQi

It is with a profound sadness that we announce the passing of George Wein, founder of the New Orleans Jazz & Heritage Festival. He was 95. pic.twitter.com/unN4jCBh1z

Spending time with George Wein was an honor and a true joy. Thank you George for a lifetime well spent in service to music and musicians! https://t.co/oj0S8jldIf

Jazz at Lincoln Center mourns the passing of the great George Wein. George was an itinerant pianist and club owner whose five-decade career changed the landscape for presenting jazz. Our heartfelt condolences go out to his friends and family around the world. pic.twitter.com/wfw9CNCgOJ

Today I will celebrate George Wein’s legacy by revisiting this “Live at Newport” album as well as celebrating our many legends and icons who participated in creating a history of live music that can be enjoyed forever. Thank you much George Wein. We celebrate you! -Deen Tyner pic.twitter.com/2yoPbrDhuM

Wein and his Festival Productions Inc. produced and booked talent for the Playboy Jazz Festival at the Hollywood Bowl for more than 35 years, most with longtime associate producer Darlene Chan.

Since 1979, the Playboy Jazz Festival usually unfolded as a two-day affair on the middle weekend of June.

A few months prior each year, Hefner traditionally hosted a press conference in the backyard of his Playboy Mansion in Holmby Hills just west of Beverly Hills to announce the upcoming lineup. Many of the featured artists attended as well as favorite past festival performers.

With a few dozen invited members of the international media rolling tape and snapping photos (all deftly orchestrated by PR pro Nina Gordon and her crew for many years, into the mid-2010s), Wein sometimes opened proceedings by sitting down at a handy piano and serenading the assemblage with a classic.

After a few opening remarks, Wein and/or his ace associate producer, Darlene Chan, would list the roster of talent set to play in June.

A group photo with Hefner and Wein wrapped the formal part, and artist schmoozing and interviewing ensued for another hour or so…

…until Gordon chased the last group of reporters, photographers, and videographers types onto the last in a fleet of shuttles for the short ride back to their cars parked in a Century City garage nearby.

This reporter-photographer was among them for every year between 2005 and 2013. The photo pit in front of the Hollywood Bowl stage was the best seat in the house. 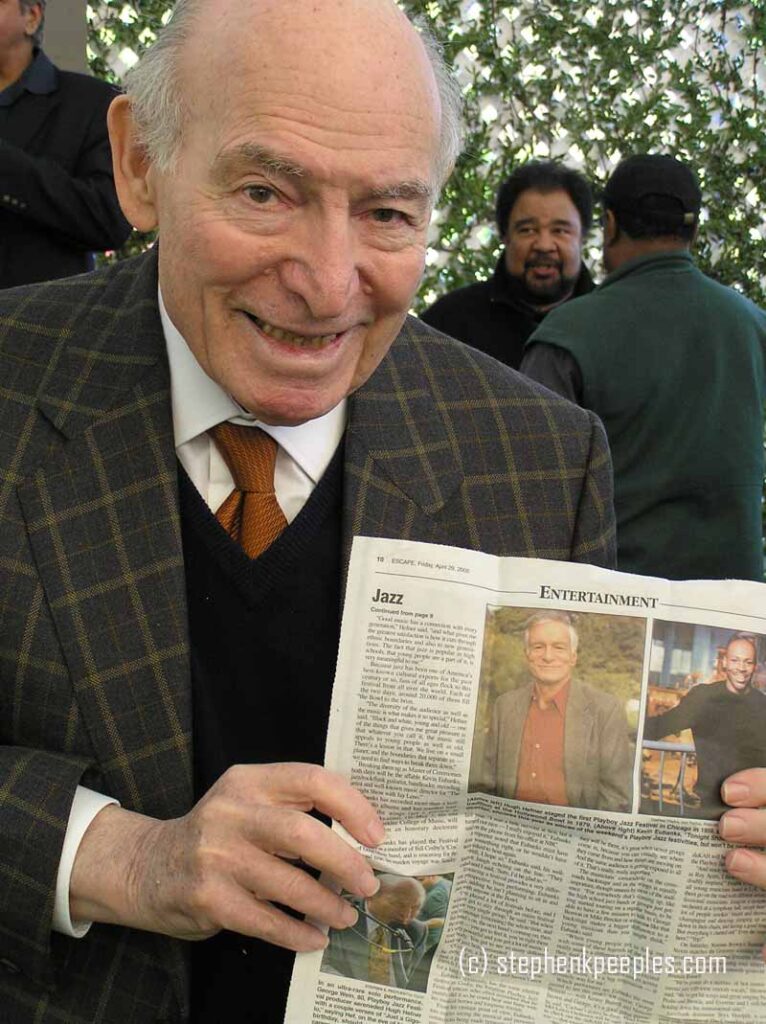 Special thanks to Nina Gordon and Peter B. Sherman.

Stephen K. Peeples is a Grammy-nominated multi-media writer-producer and radio/record-industry veteran raised in Miami and Los Angeles. Based in Santa Clarita, California, he is (as of fall 2021) co-authoring a book with artist and pop-culture legend John Van Hamersveld commemorating the 60th anniversary of Hammer’s iconic poster for “The Endless Summer” in 2023. Peeples is also developing an art book-biography of notorious Texas Artlaw Boyd Elder, as well as the backstage memoirs of Cindy Johnson and Jeri Jenkins of Home At Last, the Miami-based concierge service for rock stars recording at Criteria and Bayshore Studios. For more info and original stories and interviews, visit Peeples’ website and YouTube channel.