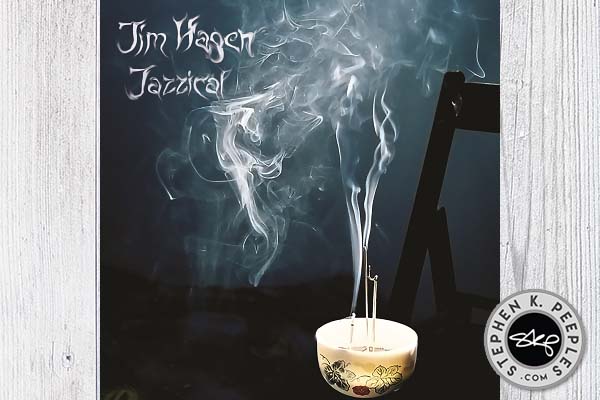 For veteran contemporary jazz guitarist Jim Hagen, “Jazzical” is more than the follow-up to his critically acclaimed 2012 eponymous debut. 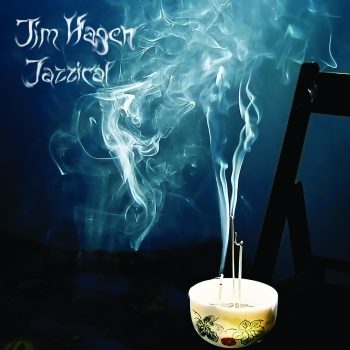 “Jazzical” is also a sublime tribute to and true celebration of the friendship and musical chemistry he shared for years with renowned vibes player Rod Bennett, an integral part of Hagen’s popular Southern California ensemble Hagen Jazz.

Hagen released the all-instrumental “Jazzical” on May 19, 2017, just shy of a year after Bennett – an avid cyclist and beloved music teacher as well as popular local musician – was killed by a hit and run driver the previous May 25.

Bennett’s tragic death hit Hagen hard. Responding in the most inspiring way possible for a friend and fellow musician, he sifted through his archives and added recordings of two jazz standards the two had made a few years earlier to secure local gigs as a duo – the Bossa Nova classic “Manha de Carnaval” and Miles Davis’ “All Blues.”

Hagen rounded out the “Jazzical” set with another pair of tracks featuring Bennett that originally appeared on his first album – “Piece of Cake” and “On the Scene.”

The only “Jazzical” track not featuring the magical Hagen-Bennett connection is Hagen’s easy-flowing, sunny and soulful “Pismo Beach,” the album’s first single.

Hagen’s previous single, “Midnight Drive” from his debut album, was the fourth most downloaded song on the All About Jazz website in 2014, establishing him as a force in the genre. “Midnight Drive” ranks in that site’s Top 200 downloads of all time (currently in the Top 100) and still gets regular play on Jango radio.

“‘Jazzical’ is a very different project from anything I’ve ever done instrumentation-wise, and we even have a little glockenspiel, which shows a little of my early Genesis influence entering the picture,” Hagen said.

He came up with “Jazzical” for the album’s title track based on the evolving nature of the tune, which begins with a hypnotic classical guitar line before the guitarist starts playing jazzy chords, plucking each note individually as the rhythm section (including bassist Roger Brooks and drummer Lance Allyn) kicks up the groove. 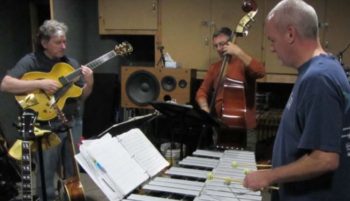 “Jazzical” is a premier showcase for the intuitive melodic/harmonic interplay between Hagen and Bennett, and the guitarist calls his friend’s solo on the track “one of the best I’ve ever heard.”

“Rod and I both had classical background training, he on vibes and percussion and I on the guitar,” said Hagen, whose rack of guitars includes a hollow-body electric, a 12-string electric, a nylon string acoustic and an acoustic steel string guitar (which he plays on “D’Tuna”).

“The sound of the vibes is ethereal, like a bell that rings out and takes my songs to a deeper emotional, and definitely jazzier level,” Hagen said. “When I play, I am always striving to get a sustain in a lot of chord melodies I play. There’s some strumming on ‘Jazzical,’ but most of the time I’m taking a fingerpicking approach. Instead of the usual slamming of guitar chords, I’m usually picking out the notes or chords to best express the melody.

“I love the articulation between guitar and vibes and the contrast we created when we played,” he added. “It’s a cleaner sound than most jazz enthusiasts are used to hearing. Rod and I were so like-minded in how we played, and it made sense to really showcase what we did together as a tribute to the way he inspired me as a friend and musician. Even before my group was known as ‘Hagen Jazz,’ he and I had been playing in various combos together throughout the region ever since I moved up to Santa Clarita.”

Jim Hagen – The Road from KC to California

A native of Kansas City, Jim Hagen got his first guitar at age 10 and took lessons for years, first at a local community center, then privately and later at Penn Valley Community College and a semester at the UMKC Conservatory of Music. His father was a jazz pianist who introduced him to old-school big band and jazz standards he would frequently play on the piano.

At the same time, Hagen’s chief influence on guitar became Wes Montgomery, and his fascination for progressive rock led him to join the band Prophet, which played a lot of early Genesis and Yes songs. Prophet opened for several prominent rock gods, including Bill Bruford’s band with Jeff Berlin and Dave Stewart and John Kay & Steppenwolf.

When he moved to Southern California, Hagen kept his musical education going, studying classical guitar and piano at Glendale College with Robert Vaught, who later taught him privately. He also later took private lessons in jazz guitar with Ron Anthony (known for his work with Frank Sinatra) and Riner Scivally.

Hagen initially launched his career as a pop-rocker under the group name Arroyo Culture and recorded tracks that appeared on a CD compilation with other bands. Arroyo Culture was once featured in College Music Journal’s “Futures” section. Even then, Hagen said, his guitar solos were “very jazzy in nature.”

Hagen has been gigging regularly, playing jazz standards, classics and original material throughout Southern California since the mid-’90s, first throughout the San Gabriel Valley and later in Santa Clarita.

He laid the groundwork for his breakthrough “Jim Hagen” album with Hagen Jazz, which he founded with Bennett in 2008. The quartet (whose rhythm section evolved but often included Roger Brooks and Lance Allyn) had a notable two-year Sunday afternoon residency at Valencia Wine Company, and did many performances at Salt Creek Grill, Cheers at All Corked Up and many private functions around the Santa Clarita Valley and Southern California.

Hagen Jazz has also played Vine to Wine, a charity fundraising event at California Institute of the Arts in nearby Valencia, and for the past several years Hagen and crew have also been favorites at the annual SCV Soroptomist Wine Affair benefit in Santa Clarita. 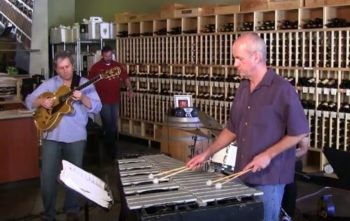 In July 2016, Hagen Jazz hosted the first Rod Bennett Memorial Jam Session, which included performances by many of the musicians Hagen and Bennett played with over the years. In August 2016, Hagen Jazz carried on as headliners of the Rivendale Jazz and Blues Summerfest.

“I’m very proud of everyone’s playing and the stylistic diversity of ‘Jazzical,’ but the thing I love most about the album is being able to listen to some of Rod’s most inspired vibes work,” Hagen said. “I’m grateful he left a lot of great music behind and now that he’s no longer with us, I realize just how amazing his ability was.”

As much as he enjoys recording, Hagen lives for the musical interplay that happens onstage.

“There’s nothing like playing live with great musicians,” he said. “Something amazing happens when the song starts, everyone finds the groove and then I’m able to improvise over the foundation they put down. When you’re onstage and everyone’s sharing the same brainwave, it’s a wonderful experience.”

“Jazzical” is available via iTunes and Amazon as of May 19, 2017. Find out more about Jim Hagen and Hagen Jazz at the band’s website.

The preceding was an edit of a bio provided by UE3 Promotions. Photos courtesy Jim Hagen.