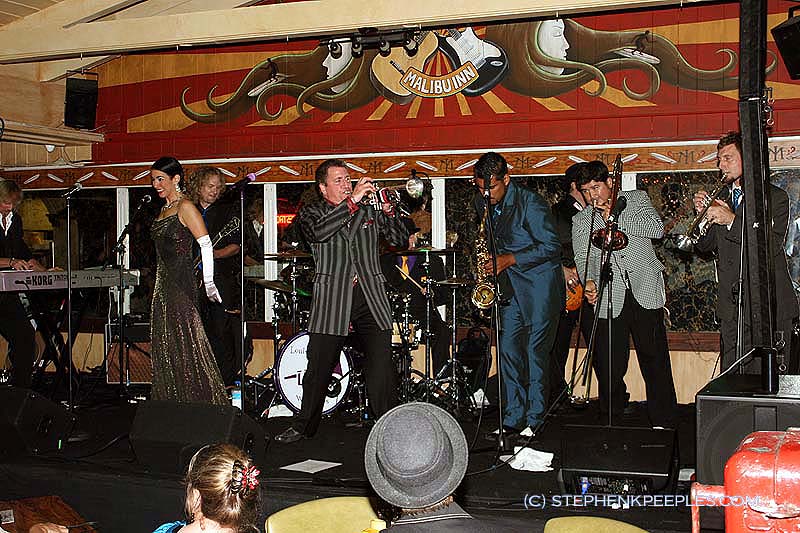 Jamming the postage-stamp-sized stage, the nine-piece band decked out in full retro-swing style performed even harder, tighter and wilder for the small but loudly appreciative crowd than they had the previous night for a much larger and just as appreciative audience on the “Jimmy Kimmel Live” outdoor stage headlining the Italian Feast in Hollywood.

In Malibu, the group had nothing to prove; it was a pure display of their love of performing the music and the joy of pleasing a crowd.

Along with a guest appearance on “Access Hollywood Live,” the two dates were part of a coast-to-coast tour supporting the well-received “Return of the Wildest!” debut album by Prima Jr.,  son of legendary singer, composer, trumpet player and bandleader Louis Prima. After a stop in San Diego, they were off to Florida, New Orleans and other Gulf Coast gigs.

The younger Prima, who all but grew up with a horn in his hands, and Florida-born singer Spiegel fronted the outfit. She’s in her late 20s but  idolized the original Prima band as a kid and perfectly plays the Gia Maione/Keely Smith foil for Jr. They were flanked at stage left by a hyperactive three-piece horn section featuring Marco Palos (tenor sax), Phil Clevinger (trombone) and Ted Schumacher (trumpet).

Working up a sweat behind them in the rhythm section were Ryan McKay (guitar), Michael Gorbino (bass), Gregg Fox (keyboards) and A.D. Adams (drums).

The set drew mainly from “Return of the Wildest,” both opening with “Oh Babe” (the same Prima Sr.  tune they played on “Access”), then ripping into Prima’s signature  “Jump, Jive ‘n Wail,” “Bei Mir Bist du Schon” (a duet with Spiegel), “Five Months” (an extra not on the album), “I Wan’na Be Like You” (Prima Sr.’s song as King Louie in “The Jungle Book”), “Sunday Kind of Love” (Spiegel spotlight on a classic Prima ballad), and an all-stops-pulled version of “Sing, Sing, Sing” (Prima Sr.’s swing National Anthem, also made famous by Benny Goodman with Gene Krupa on drums, and not on “…Wildest!”), and “Night Train” (Palos’ over-the-top sax solo earned a huge ovation).

Midway through the set, McKay offhandedly played the opening guitar lick to “Your Mama Don’t Dance,” the Loggins & Messina rocker from1972. ” Prima Jr. told him to knock it off, or they’d wind up having to play it. McKay persisted, and the retro wall was broken; the band jumped out of character and into classic rock band mode without missing a beat, and nailed the song just like they did with the jump-swing repertoire, vocals, horns, choreography and all.  The crowd loved it.

“We’ve never even rehearsed that before,” Prima told the audience afterward, catching his breath (his manager later swore to me this was true).

The band also goofed off with a bit of The Rolling Stones’ “Satisfaction” as Adams took center stage to sing and move like Mick Jagger while Prima Jr. took over the drums. They segued into a bit of “I Feel Good” with Clevinger working out a la James Brown. Crowd-pleasing stuff to be sure, but the group’s tight musicianship and unbridled enthusiasm made for a fun diversion.

Back into the retro groove, LPJ, Spiegel and The Witnesses delivered “I’m Confessin,'” “New Kind of Love” and “Oh Marie” (album extras), then “Las Vegas Woman” and “I Want You to Be My Baby” (from the album), “Angelina” (another Italian pop classic not on the album), and the roof-raising set-closers “Just a Gigolo-I Ain’t Got Nobody” (the Prima Sr. hit revived by David Lee Roth in the ’80s, and the closing track on “Return of the Wildest!”) and the traditional “When the Saints Go Marching In.”

The band ended “Saints” and the set by exiting the small stage one by one, following Prima Jr. as they paraded through the crowded room without missing a beat (or a note, thanks to wireless mics). It was a vision of New Orleans-style revelry rarely if ever seen on a Malibu stage.

As I noted in my story previewing the group’s visit to SoCal, Prima Jr.’s “Return of the Wildest!” debut CD, distributed by Warrior Records/Universal Music Distribution, blew my hair back when I first heard it. The 10 tracks deliver a powerful update to the exuberant, horn-driven swing-jump sound mastered by Prima Sr. in the ’40s and ’50s, and Spiegel’s vocals are as wild and sexy as she looks in her stunning retro outfits. The album captures the buoyant, roof-raising celebration of good times the band presents onstage, as they did in Hollywood and Malibu, and I highly recommend it.

Check out LJP’s latest promo video, “Explore Your Inner Vegas,” a nod to his beloved hometown.

Get the latest news and updates at louisprimajr.com.

+++++++++++++++++++++++
In addition to his “Peeples Place at KHTS” blog, Stephen K. Peeples is a writer/reporter for KHTS News (www.hometownstation.com) and SCVNews.com, and host, writer and co-producer of the weekly “House Blend” music and interview television show on SCVTV, community television for the Santa Clarita Valley (www.scvhouseblend.com). A former SCV music and entertainment columnist for The Signal (2004-2011) and drummer with SCV jazz group RainTree (www.raintreejazz.com, 2010-2011), Peeples is a Grammy-nominated record producer (“Monterey International Pop Festival,” MIPF/Rhino, 1992), an award-winning radio producer (“The Lost Lennon Tapes,” Westwood One, 1988-1990) and an award-winning online editor (The Signal website, 2007-2011). For more information, email skp@stephenkpeeples.comor visit www.stephenkpeeples.com. 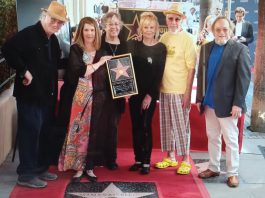 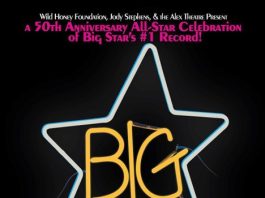 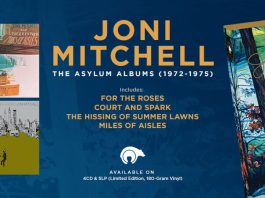 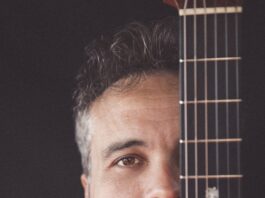 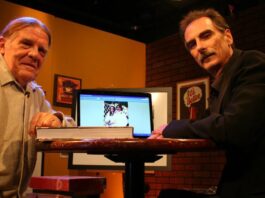