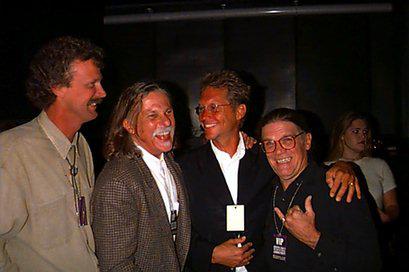 Renowned Rock Photographer Reveals Fascinating Stories Behind His Most Famous Album Covers for The Doors, CS&N, Eagles, The Monkees, and Dozens More on 1996 CD-ROM 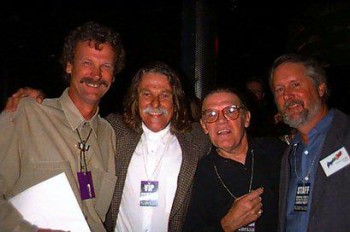 [A slightly edited 2014 version of an article written about “Henry Diltz Under the Covers” for Rhino Hot News, 1996, when the author was Rhino Entertainment’s first Online Editor.]

To anyone who’s read album cover and sleeve photo credits during the past 30 years, the name Henry Diltz is synonymous with some of the most striking and memorable images in rock history.

After being bugged for years to make his work more widely available to his many fans, Diltz has finally co-produced and released a new CD-ROM, “Henry Diltz Under the Covers,” collecting some of the fascinating stories behind his most famous album cover photo sessions. 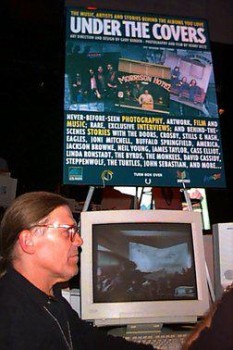 “They made us make that ugly poster,” Diltz said about the pic below right. “But it does save me from having to name all those names!”

Your Rhino Hot News editor, one of Henry’s many longtime friends (and the guy who  introduced Diltz and Blachley in the late ’70s at Capitol Records; Henry also shot the Peeples-Martini wedding in 1981) who’ve been bugging him to do something like this with his iconic images and wild rock ‘n’ roll tales, was invited to the big press party at the new Billboard Live club on Sunset marking the CD-ROM’s official launch, thanks to another longtime mutual friend, rock ‘n’ roll publicist Jane Ayer.

Diltz, an official stills shooter at Monterey Pop and Woodstock (and Woodstock ’94, for that matter), got started taking photos in the early-to-mid-1960s, just for grins. He was a member of The Modern Folk Quartet then (played banjo, nickname was Tad, ha ha, Henry, you’ll never live it down!).

Diltz started out just taking pictures of his friends, who knew, loved and indulged him in pursuing his new hobby. It’s just that his friends happened to be people like members of The Lovin’ Spoonful, The Mamas & The Papas, The Turtles, The Byrds, The Monkees, Crosby, Stills & Nash, The Doors………

Talk about access! Henry’s easy-going personality and peer status made him easy to have around. But people soon realized he captured special moments, conveying a lot of his subjects’ hearts and souls without the artist having to utter a word. 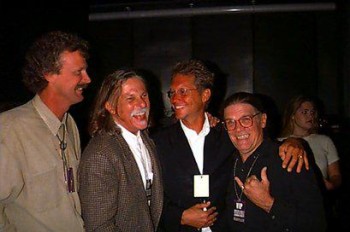 He was pals with people like Peter Tork and Stephen Stills and Cass Elliot, and wound up hanging out with The Monkees in all sorts of situations, from recording studios to TV set to concert stage to movie set. And in rare leisure moments, they still invited Henry and his camera along for the fun.

Peter Blachley, Gary Burden, Gerry Beckley of America (for whom Diltz has done numerous photo sessions), and Henry (with his 19-year-old daughter Zoe lurking in the background).

Trivia: Diltz has shot the annual Rhino company staff photo for the label’s trivia calendar the past few years. 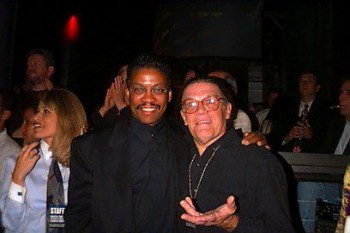 At Billboard Live, Henry also had a chance to hang with jazz great Herbie Hancock, whose “Living Jazz: Explore The Jazz Evolution” CD-ROM was produced by the same company and launched at the same party.

You can get more info about “Henry Diltz Under the Covers” from the Graphix Zone site. And you’ll find more images on Diltz’s home page, which he admits is badly in need of updating (“Hey, I’m a busy guy!”).

Visit his site. Bug him. Maybe he’ll follow with “Under the Covers II.”