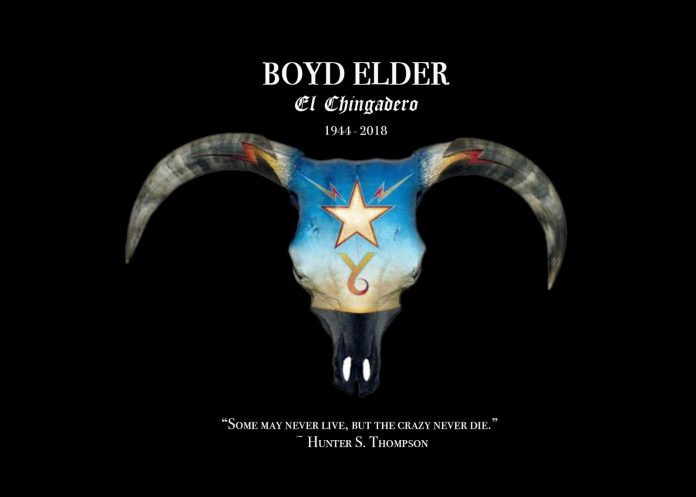 Austin, Texas resident Shaula Elder, on behalf of older sister Flaunn Elder-Jamieson of Kona, Hawai’i, honored their departed father, Texas artlaw Boyd Elder, aka “El Chingadero,” with the kind of party he’d show up to whether or not he was invited, at Justine’s Brasserie, his favorite restaurant in Austin, Texas, on Tuesday, Feb. 5. 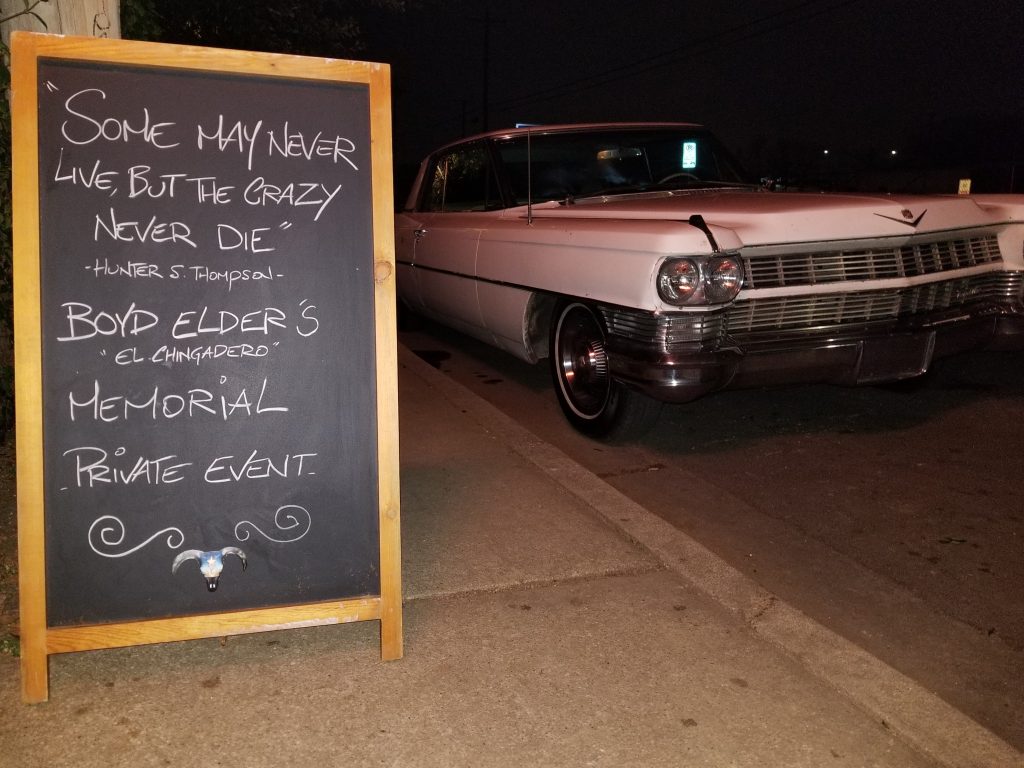 The Justine’s bash was the second of three stops (maybe more) on the daughters’ “No AMF Boyd Elder Eternal Cosmic Stardust Tour,” the first being a blowout in Marfa at Capri on Nov. 3, 2018.

It was dubbed the “Some May Never Live, But the Crazy Never Die” party as an homage to gonzo journo Hunter S. Thompson, an Elder kindred spirit. After a life lived to the hilt, Elder died of natural causes in San Marcos Oct. 6, 2018.

Justine’s is usually dark on Tuesday nights but co-owners and longtime Elder family friends and Justine Gilcrease and Pierre Pelegrin graciously opened up especially for the invitation-only private event. Guests received a laminated all-access pass when they checked in at the door.

Shaula, her boyfriend Robbie Gaydos, their close friend Phil Snyder and others worked with Justine’s intrepid staff to transform the restaurant’s two large outside tents into a pimp-adelic performance hall and an art gallery, respectively.

The Blue Tent gallery walls were lined with canvas blow-ups Elder amigo John M. Thornton had done of classic Boyd photos, and display tables were stocked with sundry Boyd-ian artyfacts, including small vials and packets of his ashes Shaula gave to special friends.

A life-sized standup of Boyd firing up a cigarette(?), and sporting one of the lei sent by Flaunn from Hawaii to Shaula for the event, lorded over the front entrance to the room.

The gallery was highlighted by “Murderer,” the last of Elder’s famed “American Fetish – RIP” skull art pieces in the family’s possession.

In the Red Tent, on the Bordello Room stage, event co-conspirator Robin Lambaria served as emcee for the evening. Shaula opened proceedings with an eternal cosmic stardust invocation.

The celebrants raised shots of mezcal and hoisted Lone Star longnecks in honor of El Indio Blanco Loco, the man with the gravelly voice who usually rocked dark shades, a Stetson, and a smoke. We also had ’em, so we smoked ’em.

The evening’s entertainment included a special screening of “Who the Hell is Boyd Elder,” a short documentary by filmmaker Tina Rivera from interviews she shot in 2016. Those who already knew El Chingadero thought the film answered the question well.

In a special tribute during Ladykiller’s set, Bellinger strapped on Boyd’s prized Telecaster, vintage 1974-75, and shredded some hot solo licks.

“My dad said the Telecaster was a gift from one of his friends, but it could have also been a trade for some art,” Shaula said, adding she’d like to hear from anyone who knows the full story.

“Dad didn’t play it all that much, which explains why it’s in really good shape,” she said, laughing. “Our friend Phil has played it, and he said, ‘Dude, this guitar is so sexy, it’s like a wet dream!’”

Flaunn and Shaula retrieved the Tele, along with all of their dad’s artwork, artifacts and personal effects from his home and nearby studio in Valentine, when they were in West Texas for the first “No AMF” blowout at Capri in nearby Marfa on Nov. 3. With everything now safely in storage, Shaula said, she pulled out “Murderer” and the guitar and its case especially for the Feb. 5 event.

“I thought it would be cool to have someone play Dad’s guitar at his memorial,” she said.

“Ladykiller’s drummer, Zack Hoop, is a good friend of ours, a workmate of Robbie’s, and I asked him if one of the guys would like to play it onstage,” she said. “Kyle got really excited but also said he was kind of nervous to play ‘Boyd’s sweet-ass Telecaster,’ as he put it.

“So Robbie took it to Justine’s early that night and Kyle took it into the little green room area behind the garden, where he got to tune it up, do a little test run,” Shaula said. “He told me it was one of the most beautiful guitars he’s ever played.”

“Last night was a special one,” Bellinger posted on Instagram the day after. “It was a huge honor to perform at Justine’s to celebrate the life of Boyd Elder, the man Texas Monthly called ‘The Most Famous Artist You Never Heard Of.’”

“I really enjoy that band and what they’re doing,” Shaula said. “It’s rad.”

Between the musicians’ sets, DJs Two Steps from Stardom and Cowboy Casey spun the interstitial sounds.

Among them was a wailing freight train horn, which Boyd absolutely hated (as did just about everyone else in Valentine, a wide spot on U.S. 90 where he lived) because the damn freights rumble through the middle of town all day and night. 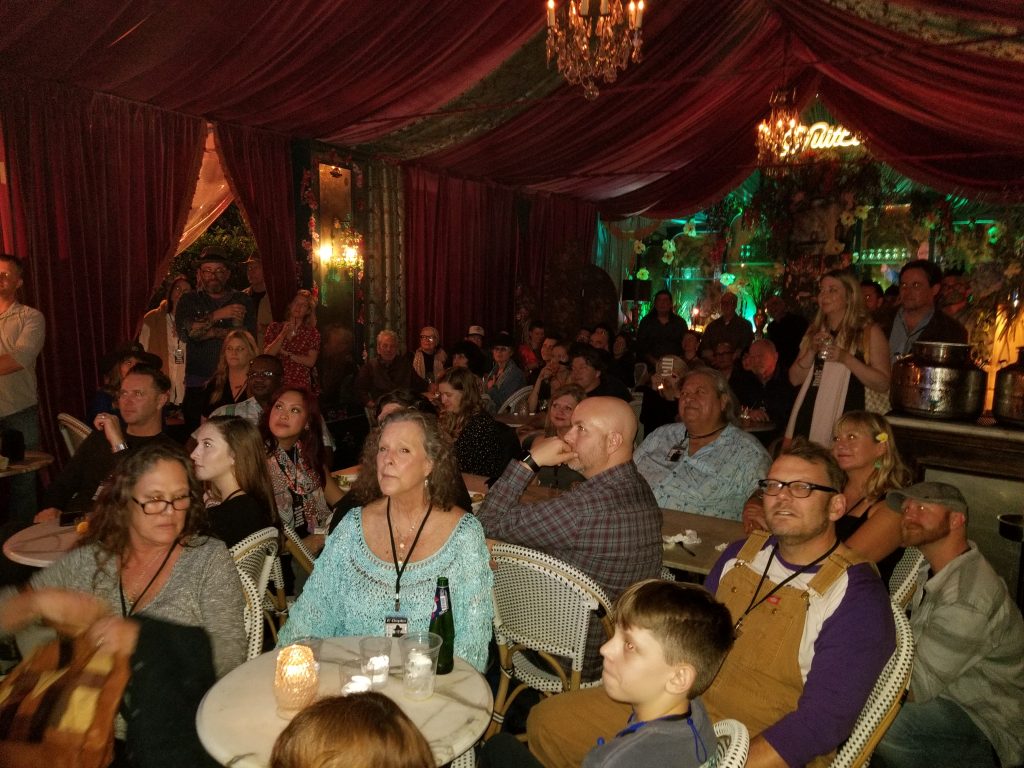 As the evening progressed, several brave souls even ventured into the mirrored “Boyd Elder El Chingadero Confession Booth” behind the restaurant and shared their fondest – and strangest or most debauched – memories for an art book and film documentary in the making, working title “Artlaw Boyd Elder: The Greatest Artist You’ve Never Heard Of.”

(For more than a year before his death, Elder had collaborated on the projects with this writer and producers Tamara Deike and Corey “Duncan” Stewart. Boyd’s family has joined the “Artlaw Gang” conspiracy to complete them.)

Justine, Pierre and Robin and the entire Justine’s crew did a stellar job setting up and pulling off the “Some May Never Live, But the Crazy Never Die” blowout, Shaula said.

“They were awesome – huge props to them. We couldn’t have done it without them,” she said. “I can’t tell you how much Flaunn and I appreciated everything they did. They really know how to throw a party.”

What made the night especially memorable was the camaraderie and friendship apparent even among strangers, because everyone attending had something in common: We’d all been “Boyded,” as friend Roy Watson said in Marfa, one way or another.

(Take a little tour of the scene as Ladykiller rocks the soundtrack.)

An alphabetical roundup of those caught in the act of attending the party (if you were there and aren’t listed, or know others who were, or can help fill in the blanks, please send an email and I’ll be happy to update):

Next stop on the “No AMF Boyd Elder Eternal Cosmic Stardust Tour”: the Sunset Strip, at the Morrison Hotel Gallery at the Sunset Marquis, co-hosted by his longtime friend and “Artlaw Boyd Elder” contributor Henry Diltz and his MHG partners Peter Blachley, Rich Horowitz and Timothy White. Plans for the Hollywood blowout are in the works for summer 2019; stay tuned for date confirmation and details.

Santa Clarita journalist and Grammy nominee Stephen K. Peeples (aka “El Perpetrado”) first drove across Texas en route from Miami to Los Angeles in summer 1968 at age 16, and experienced the Austin oasis. He has written extensively about Texas music and art since 1975 and wrote his first story about Boyd Elder in 1978. Peeples was raised by career newspaper journalists and music-lovers in Miami and Los Angeles. His first music industry gig was as an Associate Editor at Cash Box magazine in Hollywood in 1975. He was the original, award-winning producer of “The Lost Lennon Tapes” radio series for Westwood One from 1988-1990. He earned a Grammy nomination as co-producer of the “Monterey International Pop Festival” box set (Rhino/MIPF, 1992) with Lou Adler and Geoff Gans. Peeples was a record company Media Relations-PR executive for Capitol Records (1977-1980), Elektra/Asylum Records (1980-1983) and Rhino Entertainment (1992-1998). He was Rhino’s first web editor (1996-1998), then elevated to content editor of Warner Music Group websites (1998-2001). In the Santa Clarita Valley just north of L.A., Peeples was the award-winning Online Editor for The Signal newspaper’s website from 2007-2011, and wrote-hosted-co-produced SCVTV’s WAVE-nominated “House Blend” local music show from 2010-2015 (archived online and still airing in reruns). He is now a News Editor at SCVNews.com, Editor/Features Writer for Wealth Wisdom Wellness magazine, and VP/New Media Emeritus for Rare Cool Stuff Unltd. For more info and original stories, visit https://stephenkpeeples.com/. For exclusive behind-the-scenes interviews, subscribe to his YouTube channel.