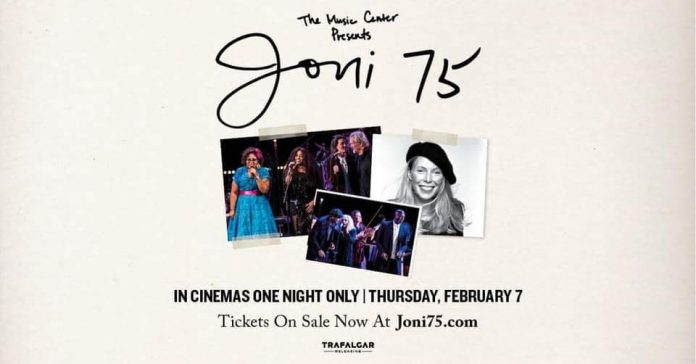 DENVER – Honoring one of the world’s most revered artists, Joni Mitchell, on her 75th birthday, “The Music Center Presents Joni 75: A Birthday Celebration” will bring an incredible array of singers and musicians to cinemas across the US and Canada for a one-night-only screening on Feb. 7, according to a press release.

Captured live in November at the Dorothy Chandler Pavilion, this special event features Brandi Carlile; Glen Hansard; Emmylou Harris; Norah Jones; Chaka Khan; Diana Krall; Kris Kristofferson; Los Lobos with La Marisoul, Cesar Castro & Xochi Flores; Graham Nash; James Taylor; Seal; and Rufus Wainwright, who will perform many of Mitchell’s songs including “A Case of You,” “Both Sides, Now,” “Down to You,” “For the Roses” “The Boho Dance” and “Two Grey Rooms,” among others.

Tickets are on sale now at joni75.com or at participating theater box offices.

A music icon whose work continues to inspire generations of artists, Mitchell performed on the Dorothy Chandler Pavilion stage in 1972 and 1974, with the Los Angeles Times describing her 1972 concert as “Joni Mitchell in a Giant Living Room.”

While Mitchell hails from Canada, she has called Los Angeles home for decades.

With nine Grammy awards and 16 Grammy nominations, Mitchell’s catalog of music spans more than five decades. In 2017, her 1971 album “Blue” was named No. 1 on National Public Radio’s list of the 150 greatest albums made by women. Her work has no boundaries and crosses genres from folk and pop to jazz and world music.

Mitchell is also a prolific painter and was once quoted as saying, “I’m a painter first, and a musician second.”

“We are thrilled to bring audiences together in movie theaters across North America to experience this magical evening,” said Trafalgar Releasing SVP of Programming Kymberli Frueh. “The incredible talent featured in this concert is a true testament to the impact that Joni has had on musicians and fans alike.”

“We were so grateful to join with these incredible artists to honor Joni, an artist who pushed boundaries to reframe what songwriting and vocal music could be,” said Rachel Moore, president and CEO, The Music Center. “And now that the concert will be shown nationwide by our partners at Trafalgar Releasing, so many more people will have the chance to witness this once-in-a-lifetime concert celebration.”

The companion “Joni 75: A Birthday Celebration” soundtrack CD is available for pre-order now at https://Verve.lnk.to/Joni75/amazon.

Check out the trailer: