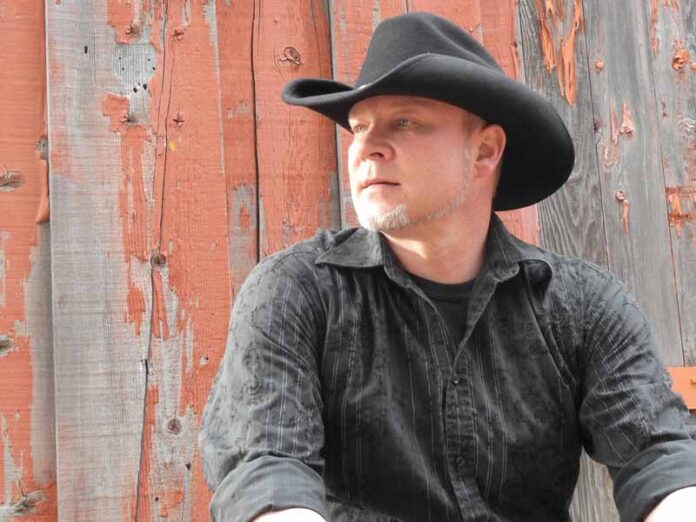 The following is an expanded and updated version of a press release Stephen K. Peeples wrote in spring 2020 for the Kai Clark “Silver Raven” media kit.

The album’s 11 tracks – reinterpretations of folk-rock-psychedelic-country-rock classics by The Byrds, Dillard & Clark, and Kai’s hand-picked favorites from his dad’s celebrated solo work from the 1960s-1980s – stand as further evidence of Gene Clark’s poetic/melodic genius and of his son’s emergence as a formidable talent in his own right. 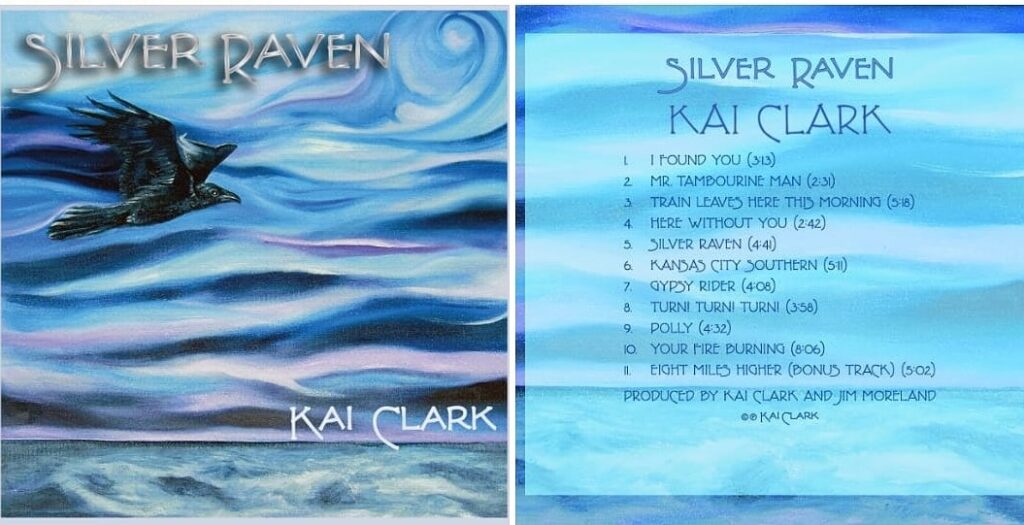 “Kai’s band is amazing, and I think he does a great job of singing,” said singer, songwriter and multi-instrumentalist Bernie Leadon, who helped his Dillard & Clark bandmate Gene Clark write “Train Leaves Here This Morning” for “The Fantastic Adventures of Dillard & Clark” album in 1968.

(Leadon also recorded a version of “Train…” four years later as an Eagle for the band’s first album; the track also appeared on Eagles’ “Selected Works 1972-1999” boxed set in 2000.)

“Kai mentions in his liner notes that he can hear his dad sometimes in his own voice, and I can, too,” Leadon said. “That’s really cool, but at the same time, Kai is his own person, a grown man.”

Born in 1973, Kai Clark grew up in Mendocino mostly with his mother, Carlie Clark, and brother Kelly, three years older, as Gene traveled on his musical path. Kai picked up the guitar while still in elementary school and with encouragement from a couple of key mentors was soon developing his own writing and performing skills. He was 17 and already in a band when his father died on May 24, 1991, at age 46.

As a bandleader, Kai Clark has been performing and recording with the lineup featured on “Silver Raven” for a decade and more. By 2018, he finally felt he and the Kai Clark Band were ready and the time was right.

“People have been asking me for years when I would record an album of my father’s music,” he said. “I think it took some maturity and deep reflection on my part just to understand the music and feel like I was doing a proper tribute to him and his legacy.”

“I listen to these beautiful renditions of Kai singing his father’s songs. He is his father’s son and carries on Gene’s legacy in this lovely tribute. Well done, son, well done.” – Chris Hillman (The Byrds, Flying Burrito Brothers, Manassas, Desert Rose Band) 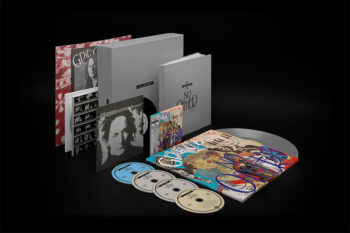 Clark’s sense of timing was underscored in November 2019, as the album sessions wrapped up, when the 4AD label reissued  “No Other,” his father’s celebrated 1974 solo album. Just one of several recent Gene Clark-related projects amplifying his legacy, the lavish box set earned major accolades worldwide and sold out fast, in effect setting the stage for the progeny’s “Silver Raven.”

In choosing the album’s songs, Clark said, it was essential his homage paid respect to the different eras of his dad’s career and the genres he helped pioneer, from folk-rock to psychedelia to cosmic country-rock to alt-country Americana.

Clark’s influential solo work is represented by “Silver Raven” (from “No Other”) and “Kansas City Southern” (from 1977’s “Two Sides to Every Story”) and later classics with Carla Olson (“Gypsy Rider” from the 1987 Clark-Olson album “So Rebellious a Lover”).

“We also looked at other songs I felt didn’t get the credit they deserved when originally released,” Clark said, among them “Your Fire Burning,” an ’80s demo by his dad that was first released in 2001 on the “Gypsy Angel” collection.

“A lot had to do with things my band and I have played, things we knew and were fond of, that touch my heart and the band’s heartstrings in some way,” he said. “Some of these songs I hadn’t played much before, but I knew when we played them together as a band that they should be included in the album.”

Joining the core players on various tracks were a few very special guests who knew and performed with Gene Clark, and have known Kai since he was a wee lad – fiddle player extraordinaire Byron Berline (former member of Dillard & Clark); singer-songwriter-guitarist Carla Olson (recording and touring partner); and harmonica player Henry Diltz (Modern Folk Quartet co-founder who also took the classic 1966 photo of Clark on the reissue of the 1973 album “Roadmaster”).

Ingrid Neimanis aka Indigo Mariana, curator of Gene-Clark.com and the Clark-focused “Echoes” newsletter, designed the tri-fold CD package, with cover art by Gabriella Gordon, photographs by Amber Clark, and a collage by EA Oleno, who created the cover art for 1974’s “No Other.”

An eight-page booklet includes liner notes penned by music journalist and Grammy-nominated producer Stephen K. Peeples, who wrote the notes for the “McGuinn, Clark & Hillman” album for Capitol in 1979. Mariana also contributed an essay about Clark’s songwriting, while Tom Sandford of Clarkophile.blogspot.com provided a detailed Clark discography and a heartfelt tribute.

Chris Hillman, a Byrds bandmate of Clark’s in 1964 (who went on to further renown in the Flying Burrito Brothers, Manassas, and the Desert Rose band), sent his note to Kai for the package after hearing the final “Silver Raven” mix.

“It warms my heart that Kai Clark has chosen to help keep his father’s music alive,” John York, a member of the latter-day Byrds who toured and recorded with Gene during his solo years, also wrote in the “Sliver Raven” notes. “[Kai] is establishing a family tradition in a decent and respectful way with the help of his excellent band. We all benefit from his labor of love and music.”

“Silver Raven” and more information about the sessions are available now via Kai Clark Music (kaiclarkmusic.com and kaiclarkmusic@yahoo.com), with digital downloads available from Apple Music and Amazon Music.

Officially released May 1, “Silver Raven” has been well-received by fans and critics in the U.S. as well as Europe on its first flight out of the nest.

“I think [“Silver Raven”] is amazing,” Bernie Leadon told me. “The production’s really good. As he said himself, his dad had many albums and a lot of songs and Kai picked the ones that mean the most to him. I loved some of the choices, and his version of ‘Train…’ is a very honest reading of it. And that band … ‘The Two Dons’? They’re both really good.”

“Kai is blessed with a beautiful baritone voice not unlike his father’s, allowing him to give the songs an air of authenticity without sounding imitative or contrived,” wrote John Einarson, author of “Mr. Tambourine Man: The Life and Legacy of The Byrds’ Gene Clark” in a Facebook post.

“His respect, admiration and pride in these songs is evident throughout. The arrangements take songs that were recorded decades earlier and casts them in a contemporary technological setting that brings them to life for listeners young and old,” he said.

“‘Silver Raven’ represents some of Gene’s finest recorded work and a cross-section of his career. Well worth checking out,” Einarson said.

“People have just been so blown away, for a lack of a better word, with the album,” said Kai, not one known to boast about himself that way. “Coming from Gene Clark fans, who can be kind of picky about Gene Clark covers, that’s something pretty respectable and makes me feel good. The response has been great, but I think there’s more to do to get the music heard, so we’re just pushing on.”

A planned album release celebration in Colfax near his home in Northern California in early June was bumped to November. So for now, Clark and his band improvised and shot a “Music From Home” video for “Train Leave Here This Morning.” Bandmember Don Segien produced the clip in early May and posted it on May 19.

“There’s a version Kai and his wife did in their kitchen during the lockdown, like a Zoom version on YouTube,” said Leadon, who co-wrote the song with Clark’s dad in 1968, on May 21.

“Kai starts singing it, and then the other band members are all in their houses,” Leadon said. “It’s really cool.”

Clark said after having to postpone the album release party, he and Amber had been thinking about shooting a video when Segien also floated the idea.

“Don just beat me to the start and said, ‘Hey, let’s do video, like a lot of these other people are doin’ from home,’ and I thought it was a great idea,” Clark said.

“Don’s got a degree in engineering, so he was the right guy to put that all together, and I was happy with the way it came out,” Clark said. “We look forward to doin’ more of those because music is what we love and we sure miss bein’ out there playin’ for everybody.”

Between the time the band shot the raw footage and Segien posted the final cut, tragedy struck the Clark family: Kai’s brother Kelly died on May 10, at the age of 48. 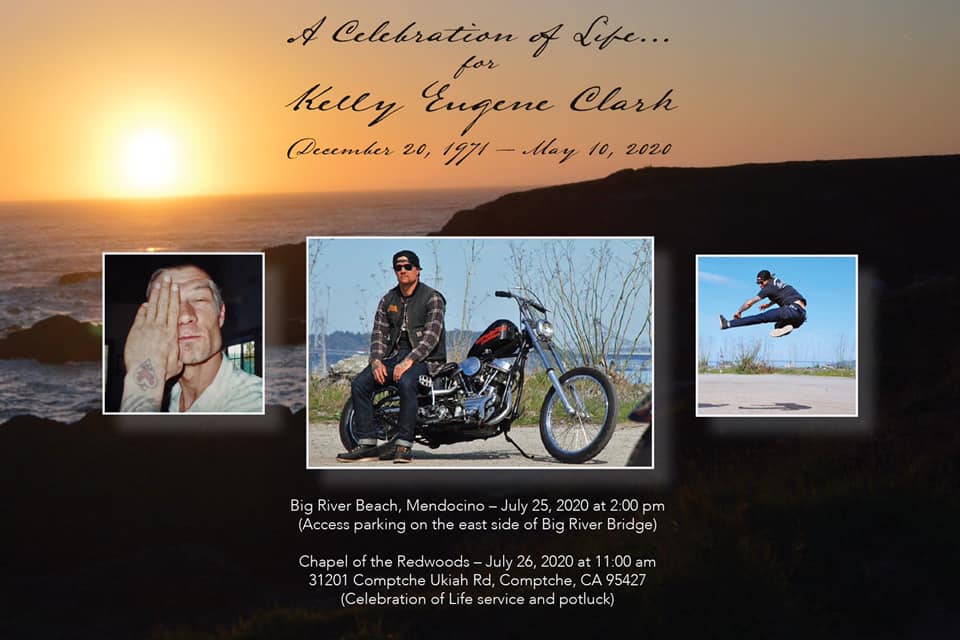 “Of course, we didn’t expect the loss of my brother. That’s been tough,” Clark said.

“All of his friends said, ‘Man, I’ve never seen him happier than when he was seeing you up there onstage playing,'” he said. “Kelly was so proud of me. I know he would want me to continue on with it and work at it. Music brings me a little joy and is a great way to express things you can’t always express in your everyday life, so we’ll continue on with that.”

Kai Clark is now carrying on a couple of legacies.

“I think Kai’s on to a good direction for himself,” Leadon said. “I’m really glad he will be carrying the banner on for the family – I think it’s awesome.”

In August 2020, Kai reconvened the band to create a “Music from Home” video for “Gypsy Rider,” a song Gene Clark and Carla Olson recorded in 1987 for their “So Rebellious a Lover” album. “Silver Raven” producer and KCB bandmembers Jim Moreland plays drums (and produced the audio), Don Ian’s on electric guitar, and Don Segien Jr. plays mandolin (and produced the video). Olson joins in as a special guest (vocals, guitar), with Byron Berline (fiddle, as on the “Silver Raven” album) and Leland Sklar (bass; Lee played on Gene Clark’s “No Other” album, among others).

“‘Gypsy Rider’ holds a very special place in my heart, and I think it’s one of my dad’s very best,” Clark says in the intro.

Shortly thereafter, Kai and band and friends shot a “Music from Home” video for “Mr. Tambourine Man,” and posted it on August 29.

Santa Clarita journalist and Grammy nominee Stephen K. Peeples was raised by career newspaper journalists and music-lovers in Miami and Los Angeles. He earned a Grammy nomination as co-producer of the “Monterey International Pop Festival” (Rhino/MIPF, 1992) box set with Lou Adler and Geoff Gans. Peeples was the original, award-winning producer of “The Lost Lennon Tapes” radio series for Westwood One from 1988-1990, and writer/producer of hundreds of WW1 programs in the preceding five years. • His first music industry gig was as an Associate Editor at Cash Box magazine in Hollywood in 1975. He went on to be a Media Relations-PR executive for Capitol Records (1977-1980), Elektra/Asylum Records (1980-1983) and Rhino Entertainment (1992-1998). • Moving online, Peeples was Rhino’s first web editor (1996-1998), then elevated to content editor of Warner Music Group websites (1998-2001). • In the Santa Clarita Valley just north of L.A., he was the award-winning Online Editor for The Signal newspaper’s website from 2007-2011, and wrote-hosted-co-produced SCVTV’s WAVE-nominated “House Blend” local music TV show from 2010-2015 (archived online and still airing in reruns). • He is now a News Editor at SCVTV’s SCVNews.com, SVP/New Media Emeritus for Rare Cool Stuff Unltd. and developing a biography of Texas artist Boyd Elder. For more info and original stories, visit https://stephenkpeeples.com/. For exclusive behind-the-scenes interviews, subscribe to Peeples’ YouTube channel.